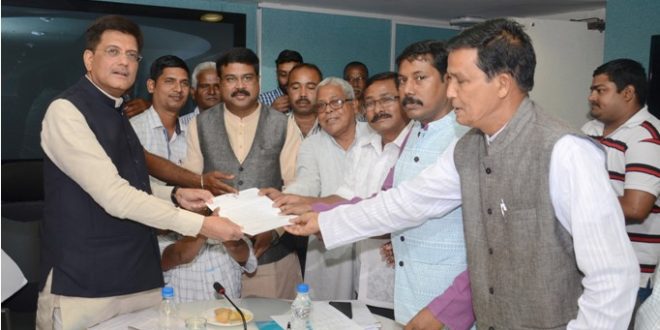 Lack of regular meetings, non-appointment of Rehabilitation Officer (RO) and Land Acquisition Officer (LAO) and lackadaisical approach of the committee in addressing the issue of the people was highlighted. The lack of initiative in peripheral development and other associated issues were also brought to the notice of the Coal Minister.

Taking into consideration the issues raised by the land oustees, Dharmendra Pradhan urged Piyush Goyal to constitute a high-level committee from the Ministry to redress the grievances of the land oustees and provide adequate relief and compensation.

In conformity of the request of Dharmendra Pradhan, it was decided by Piyush Goyal that a high-level committee will be constituted.

The Committee will visit affected areas for redressing the long pending demands and will give recommendations for the benefit of the oustees. The Committee will interact with the officials of the State Government, officials of MCL and all stakeholders, so as to find a just and reasonable solution to the grievances of the land oustees. It was also decided that the issues/grievance of the land oustees will be resolved within a stipulated timeframe.

Pradhan expressed his gratitude to Piyush Goyal for his kind intervention and pro-active steps. He expressed confidence that the suggested mechanism will help in resolving long pending issues, provide justice and fair compensation to the affected persons.