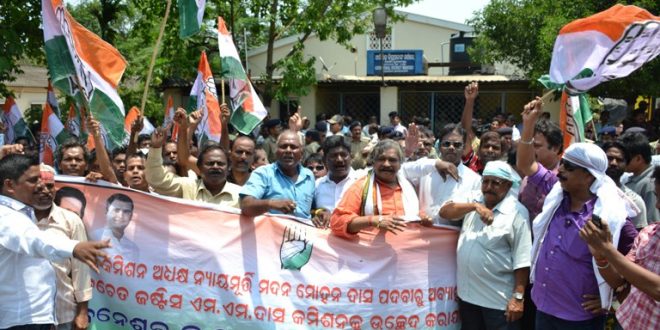 BHUBANESWAR: Intensifying their demand for removal of minister Sanjay Dasburma and chit fund probe panel head M.M. Das, the Congress and BJP on Monday took out rallies and held demonstrations at several places in the state.

The Congress party staged demonstrations at district headquarters demanding the resignation of Dasburma and dismissal of M.M. Das. It also submitted a memorandum to Governor S.C. Jamir through the ADM in the capital city of Odisha.

The Congress leaders said that the agitation would continue until the state government takes action against the duo.

The Odisha BJP also took out a rally in Cuttack demanding ouster of Dasburma and the chit fund inquiry commission.

They took out a rally from the party office at Buxi Bazaar to the chit fund inquiry commission office demanding the chairman’s removal for attending an event of the ruling BJD and making controversial remarks against the duped chit fund investors.

Party sources said the BJP workers would stage demonstrations at 31 organisational districts on May 3 raising the chit fund scam issue.