BALASORE: India on Sunday test-fired an interceptor missile from the launch complex of Abdul Kalam Island in Odisha’s Bhadrak district.

According to Defence Research and Development Organisation (DRDO) sources, the indigenous Advanced Air Defence (AAD) interceptor missile was fired from launch pad number-3 of Integrated Test Range (ITR) at Chandipur in Balasore district while Prithvi-II missile was test fired from a ship in the Bay of Bengal near Paradip.

The test was conducted at about 11.15 am on Sunday.

Sources said, the interceptor missile successfully hit the target even though the DRDO is yet to confirm it officially. 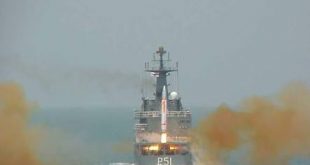