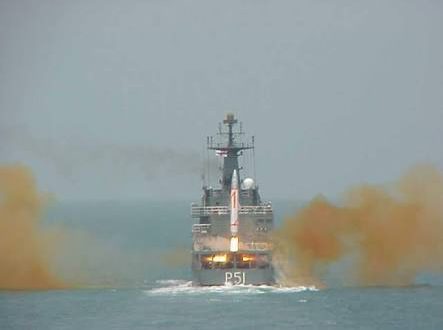 The surface-to-surface missile was test-fired from the ship positioned near Paradip in the Bay of Bengal, said a defence official.

The trial was carried out by the Strategic Force Command (SFC) of the defence forces.

Strategic Forces Command of the Navy conducted the test from an undisclosed location nearly 45 km from Odisha’s Paradip coast. This is third test of a Prithvi variant missile this month and second in the last three days.

The missile has already been inducted into the defence services.

Dhanush, with a strike range of 350 km, is capable of carrying a payload of 500kg and hitting both land and sea-based targets, the sources said.

It is a naval variant of the indigenously-developed ‘Prithvi’ missile.