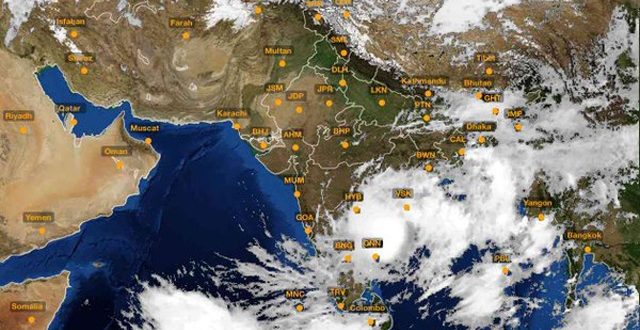 BHUBANESWAR: The cyclonic storm ‘Roanu’ formed over the Bay of Bengal would intensify into a severe cyclonic storm by tonight while it is likely to bring heavy to very heavy rainfall at several places in Odisha, said Indian Meteorological Department on Friday.

“The cyclonic storm over west central Bay of Bengal moved northeastwards at a speed of 16 kmph during past six hours and lay centred at about 280 km Southwest of Gopalpur,” said a bulletin of IMD.

“The system is likely to move northeastwards along & off Andhra Pradesh and Odisha coast and intensify into a severe cyclonic storm by tonight. Continuing moving northeastwards, the system is likely to cross south Bangladesh coast between Khepupara and Cox’s Bazar on the night of 21st or early morning of 22nd May as a cyclonic storm,” the bulletin added.

“Gusty surface wind speed from Southeasterly direction reaching 60 to 70 kmph with gusting to 80 kmph in South Odisha Coast and 45 to 55 KMPH gusting to 65 KMPH in North Odisha Coast would prevail along and off Odisha Coast, but wind speed would increase towards afternoon today. Sea condition is very likely to be high to very high along & off Odisha coast,” said IMD.