SAMBALPUR: The vigilance sleuths on Wednesday arrested a school headmaster on graft charges in Sonepur.

Dani Nag, headmaster at Karlamuhan U.G.M.E School under Tarva Block in Subarnapur has been arrested by vigilance officers of Sambalpur Division for demanding and accepting a bribe of Rs.40,000 from complainant Laxmikanta Kheti of Bolangir district.

The complainant alleged that accused Nag assured to provide job to his nephew, Balasya Mahakur in Bhubaneswar Railway Workshop by influencing the higher Railway authorities.

The headmaster demanded Rs.40,000 for this purpose. Finding no other alternative, the complainant reported to vigilance.

Accused Dani  Nag was caught red handed while demanding and accepting bribe  Rs.40,000 from the complainant.  The bribe money was recovered from the possession of Nag. 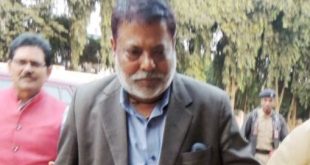