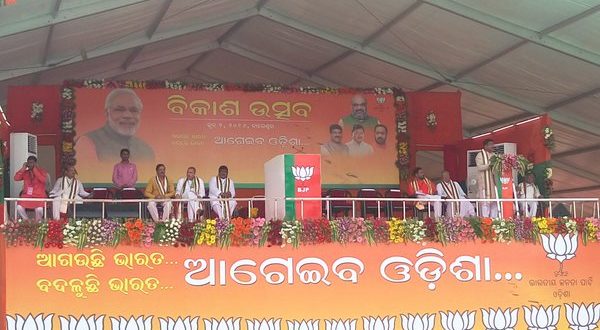 Thousands Gather As Prime Minister Modi To Address At Balesore

BALASORE: Prime Minister Narendra Modi has arrived at Balasore to address a public gathering on Thursday. He will highlight the welfare schemes initiated by his government on the completion of two years at centre.

Thousands of people have gathered to listen and take a glimpse of Narendra Modi.

Speaking on the occasion, Petroleum Minister Dharmendra Pradhan said the centre would provide all assistance for the development of the state.

He said the centre had agreed to state’s demand to allocate more rice to Odisha under National Food Security Act. He, however, asked the ruling party to stop politicising the issue.

He said the BJP wants to do politics by development and service while the state government is neglecting the poor.

It’s Prime Minister’s third visit to Odisha this year and the fourth one after he took over as PM in 2014.

PM Modi had earlier addressed a farmers’ rally at Bargarh on February 21 and inaugurated IOCL’s oil refinery project on February 7.

Earlier, he had dedicated the modernised and expanded units of Rourkela Steel Plant on April 1, 2015.