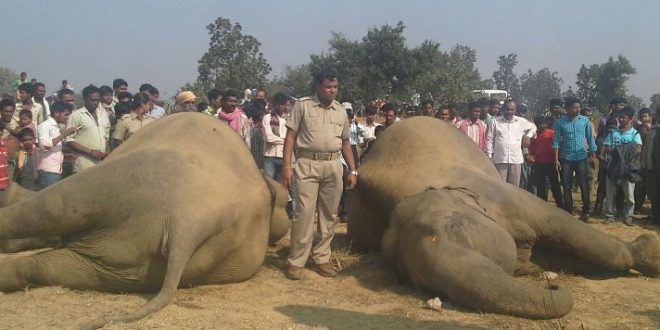 Elephants’ Death Due To Lightning: DFO

SAMBALPUR: A team of five doctors from Odisha University of Agriculture Technology (OUAT), who conducted the post-mortem of the three dead elephants in the Pravasuni forest of Deogarh district, have come to the conclusion that the elephants died due to lightning.

However, general people are not in a mood to believe such an idea.

“There is no symptom of lightning at the spot. When three elephants died, how a single grass or small plant didn’t burn on the spot,” asked the public. Even media persons and animal lovers who visited the place also are of the similar opinion.

But the DFO of Deogarh BBK Biswasi said: “The death of the elephants is due to lightening as confirmed by the OUAT doctors’ team.” He further said that the reason behind the death of the first elephant, found a week before, is also under investigation.

“Samples have been sent for further investigation and ascertain the real reason,” the DFO Biswasi added.

A review meeting with Lingaraj Otta, the RCCF from Rourkela, is going on in Deogarh forest division office. But most of the officers are tight-lipped on the matter.

Further, locals said that the particular elephant herd had eight elephants in total with a tusker, and four were already dead. Hence, further care was needed for the rest of four, if they were suffering either from Anthrax or some other dreaded disease.