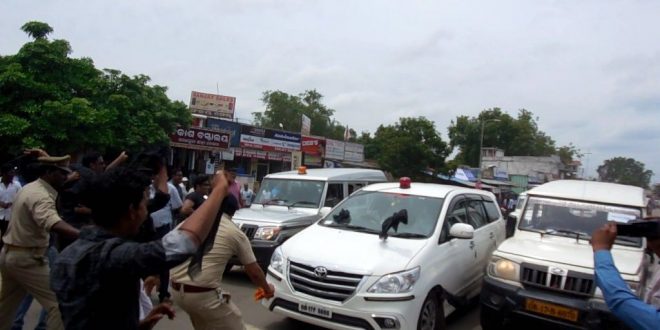 BHUBANESWAR: Union Home Minister Rajnath Singh on Saturday asked Odisha Chief Minister Naveen Patnaik to take appropriate action against the persons involved in the attack on the convoy of Central Ministers on Friday.

“HM spoke to CM Odisha regarding the incident of attack over the Union ministers Shri Santosh Gangwar & Sadhvi Niranjan Jyoti in Bhubaneswar,” tweeted the Ministry of Home Affairs (MHA).

“The HM has asked CM Odisha to look into the incident and ensure the safety and security of the Union Ministers visiting the state,” said another tweet.

The Home Minister also advised Naveen Patanaik  to take appropriate action and prevent any such untoward incident in future.

Notably, some BJD leaders alleged attacked and damaged the car of Textiles Minister Santosh Gangwar, who was on his way to attend BJP’s Vikash Ustav at Bargarh in the state.

Meanwhile, the leader of Odisha BJP submitted a memorandum to Governor SC Jamir demanding action against the attack on union ministers in Bargarh.