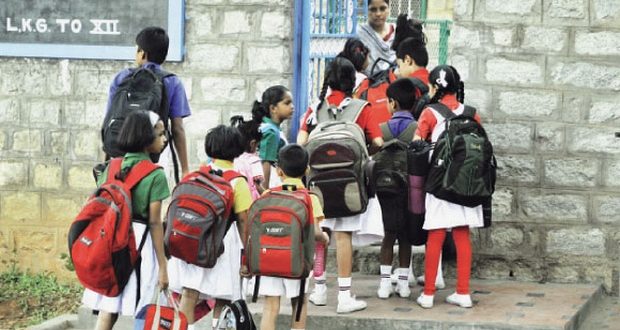 Bhubaneswar/ Mumbai: You might have witnessed students going to schools with heavy bags on their tiny shoulders and heard complaints from them about back pain at home.

Have you ever imagined that the small children could hold a press meet and complain about carrying heavy bags to schools? Yes, you read it right.

Two seventh grade boys on Monday held a press conference at Chandrapur in Maharashtra to highlight the plight of students who carry a load of 5-7 kg on their shoulders daily to attend classes.

The duo from the Vidya Niketan School narrated their daily ordeal before the media persons.

We carry a minimum of 16 books for eight subjects daily and sometimes their number increases to 18 or 20, depending on the subjects for which the classes would be held for the day. Our school bags weigh between 5-7 kg and its exhausting to carry them to our classroom located on the third floor – the boys, aged around 12 years, told reporters here.

He said that even though they requested the principal for several times to consider reducing the weight of school bags; the plea went unheard.

Notably, the Bombay High Court had directed the Maharashtra government to issue guidelines on reduction of weight of school bags carried by students on the recommendations of a committee.

In Odisha, a PIL has been filed with the Orissa High Court, which in February this year had issued a notice to the Union Ministry of Human Resources Development and State School and Mass Education Department along with CBSE and NCERT overburdening children with heavy school bags.

The petitioner alleged that children are being overburdened with the heavy weight of bags resulting in various health problems.