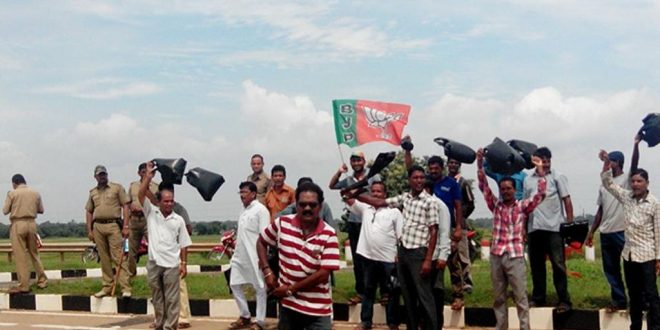 One Arrested For Hurling Eggs At Mines Minister’s Vehicle

Rourkela: As a mark of protest against the attack on Union Ministers’ convoy in Bargarh on June 24, Bharatiya Janata Party (BJP) activists on  Saturday hurled eggs at the vehicle of Steel and Mines Minister Prafulla Mallick at  Khatubahal Tangartoli in Sundargarh district.

The BJP activists hurled eggs and showed black flags at the Minister, who was going to inaugurate a bridge at  Erga under  Kutra block in  Sundargarh district.

They raised slogans against Mallick and showed black flags as a symbol of protest.

Rajgangpur BJD MLA Mangala Kishan was accompanying the Minister in the vehicle.

Police arrested one person identified as Dhanbir  Ray(38) for hurling eggs on the vehicle of the Minister.

“We have  arrested one person in this incident. We are further investigating the incident,” Said  Anita  Pradhan,  Kutra police station IIC.