Bhubaneswar: Around 451 km of coastal highway has been proposed to be constructed under Bhartmala Pariyojana along the coastal line of Odisha, said an official on Saturday.

It was decided at a high-level meeting of National High Way Authorities of India ( NHAI), Odisha Region. Development Commissioner R. Balakrishnan chaired the meeting on Saturday.

Dharmanada Sarangi, Chief General Manager (CGM) of NHAI made a presentation about the construction of the coastal highway in the state.

Considering the proposal, Balakrishnan directed to make the road architect aesthetically and environmentally compatible in consultation with Forest and CRZ authorities.

He also directed to plan the alignment in such a manner that it boosts the tourism and port-based industrial activities in the state.

NHAI was also advised to share the plan with the respective departments and collectors for their considered inputs.

The road would provide a boost to tourism and industrial activities in the region. It would also serve a highway linkage to all ports in the state, said the official.

The Development Commissioner advised NHAI to follow the principles like the alignment of the road close to the coastline in agreement with CRZ rules, develop and use the existing roads wherever possible, bypass densely populated areas, avoid wildlife sanctuaries and forest areas to the extent possible.

Available data shows, so far two expert consultants have been engaged for preliminary survey and preparation of the DPR. In the meanwhile, an initial study has been done, and preliminary alignment of the road has been suggested.

Detail Project Reports are expected to be completed by February 2017. 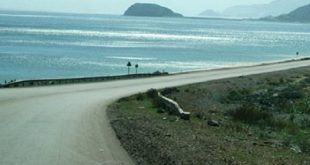