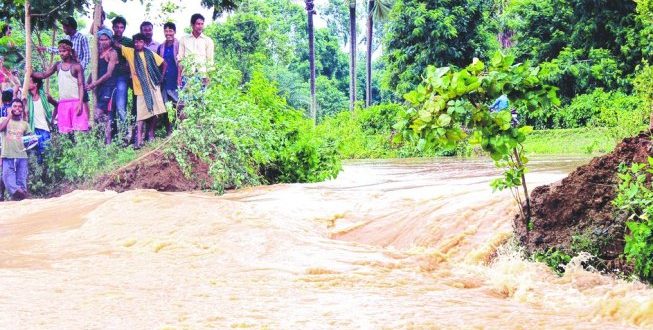 Bhubaneswar: Although the water levels of the rivers flowing in north Balasore are receding,  yet both Subarnarekha and Jalka continue to flow above the danger level on Wednesday.

The rate of discharge from Galudih barrage of Jharkhand state has reduced. About 1.3 lakh cusec water is being released through 5 gates, said Irrigation executive engineer Rajkishor Ghadai.

The low-lying areas, as well as the riverside villages, are facing more water logging although the water level is declining.

“Both Subarnarekha and Jalka are receding. There is no alarming  situation . However , further  rains could change the equations. A strict vigil is being maintained and all concerned  have been asked to be alert,” said Das , the district collector.

Meanwhile, the Hirakud dam released this season’s second flood water of the season on Wednesday following the increase of the water level in its reservoir due to rains in the upper reaches of Mahanadi.

As of now, water is being discharged through two sluice gates. The authorities said water level of the reservoir stood at 625.85 feet.

The met department has predicted heavy rainfall in next 24 hours.

“Rain or thunder shower is very likely to occur at many places over north Odisha and at a few places over south Odisha during next 24 hours,” said the met department bulletin.

It further said that heavy rainfall is likely to occur at one or two places over districts of interior Odisha during next 24 hours.