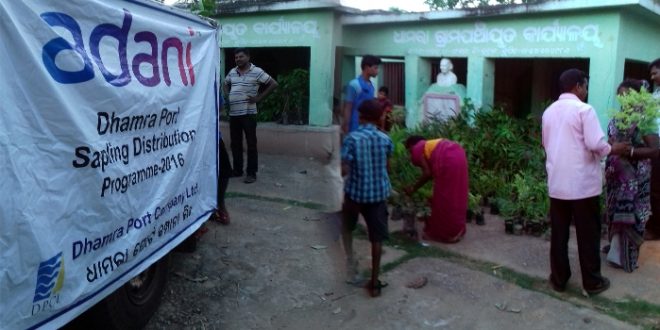 Bhadrak: The Dhamra Port Company Ltd. (DPCL), which has always worked towards creating and preserving a green environment in and around the Dhamra Port and the dedicated rail corridor, initiated a fresh drive to enhance greenery in the periphery villages.

Working on the advice of the Forest and Environment department of the state, the port authority has developed its nursery. Over one lakh saplings have been prepared this year at the nursery and already 72,000 saplings have been distributed to various Gram Panchayat and educational institutions in the vicinity.

The saplings of various useful as well as medicinal plants have been developed scientifically in a modern process.

While the Pollution Control Board had provisioned for distribution of 50 thousand saplings in the year 2016-17, the port authority has already distributed over 70 thousand saplings till date.  Last year around 22,500 trees was planted alongside the railway line as well as periphery villages of the rail line.

In recent years, over 1 lakh 60 thousand trees were planted on both sides of the Dhamra Port rail line in around 25 Gram Panchayats.  Dhamra Port has also requested the District Collector of Bhadrak to identify land patches for societal afforestation.

Besides, Dhamra Port has been felicitating eminent personalities working on environment protection with ‘Prakruti Sathi’ award every year, as part of its CSR programme.