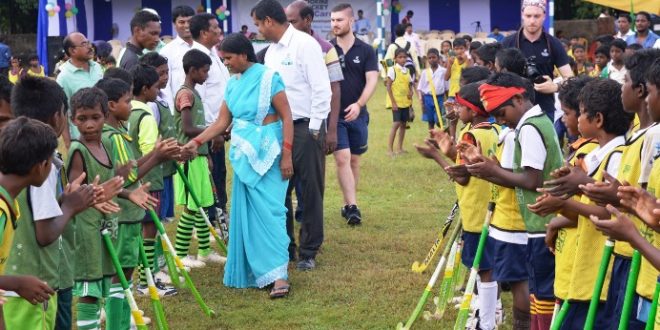 Sundargarh: Tata Steel organized a hockey carnival,  where 20 teams comprising of 300 children including 150 girls displayed their hockey skills on September 20 in front of their Australian Coaches at Gomardih in Kutra block of Sundargarh district in Odisha.

Tata Steel in association with Hockey Australia, the governing body of Hockey in Australia, has been conducting a grass-root hockey development programme  ‘Hooking2Hockey’ among school children since July 2016 around  Gomardih of Sundargarh, the district which has produced some of the best-known  international hockey players.

The children aged between 7 to 10, 15 boys and 15 girls each from 10 schools, around Gomardih, where the steel major has its Dolomite Mine, were given a preliminary training by a 3 member team of Hockey Australia in July 2016. 10 coaches from the same schools who were also trained earlier by the Australian team, guided the students.  The venue wore a festive look as the youngsters clad in colorful jerseys clashed with each other. Finally, tow teams, one each for the boys and the girls were declared as winners.

James Liggins, Participation Coordinator of Hockey Australia and his team mate Tom Winter supervised the matches among the children. The best performers will be further trained to help them get selected for joining Sports Hostel of Government of Odisha.

The winning and runner-up teams were felicitated by Sita Devi Majhi, Tahasildar, Kutra block who appreciated the initiative. Commending Tata Steel for the programme Tej Kumar Xesh, District Sports Officer, Sundergarh who had joined as the guest in the opening session said guiding the children at such an early stage will help shape their skills in future.

Captain Amitabh, Head, Skill Development, Tata Steel, who has been coordinating the programme said the initiative is aimed to attract the youngsters towards hockey and teach them basics of the game in a fun-filled but professional atmosphere to help them grow as better players.

James Liggins of Hockey Australia said he is looking forward to further sharpening the skills of the young talent who will be selected for the next round of training.