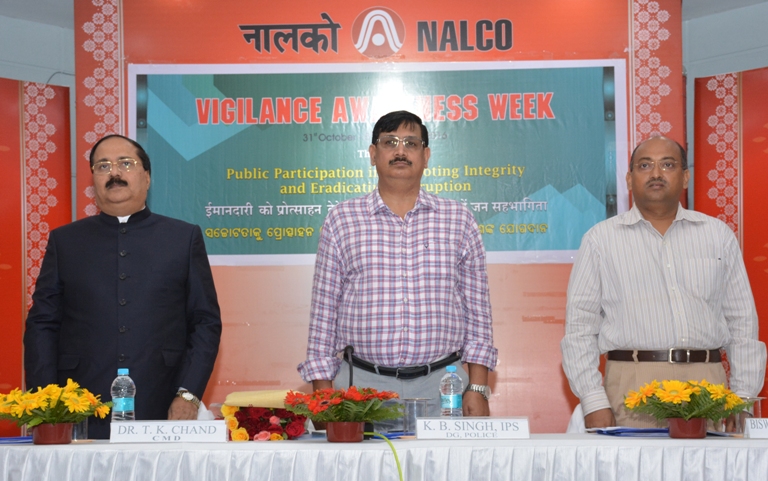 Bhubaneswar: “While affirmative action is required for compliance with rules and regulations in a system, there is a need to upgrade technology and change organizational culture to strengthen the vigilance mechanism and curb corruption,” said Nalco CMD Tapan Kumar Chand on Monday.

Chand made this observation while inaugurating the Vigilance Awareness Week at Nalco’s corporate office here on Monday.

Citing the example of Battle of Plassey, dating back to 1757, Chand said that even a single act of omission or commission like the act of bribery by East India Company to Mir Jafar led the country to lose its independence.

He also emphasized on the use of technology in controlling corruption in an organization.

He said that Nalco has taken up several initiatives to strengthen the vigilance mechanism in the company, including the signing of the Integrity Pact and implementing e-tendering and e-procurement.

“The company is soon going to implement a Reward System to motivate the vigilant employees and to encourage others to be aware of the rules and regulations,” informed Chand.

While highlighting different new methodologies to impose checks and balances on public servants, he also emphasized on the support, participation and vigilant action from the citizens of the country to check corrupt practices.

He stressed on adopting new practices to strengthen transparency in an organization and highlighted that all elements of a system should work in unison to achieve vigilance goals.

On the occasion, the vigilance awareness pledge and integrity pledge were administered among the employees. Shri A.K. Murthy, GM(Vigilance) proposed a vote of thanks.