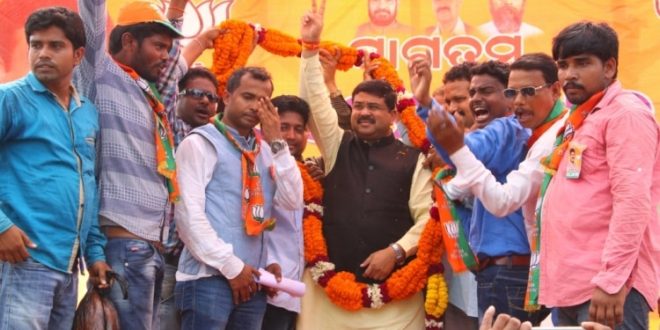 Balasore: Union Petroleum minister Dharmendra Pradhan on Tuesday took a dig at the Odisha government for its failure in implementation of National Food Security Act (NFSA) in the state.

Addressing a public meeting at Rasalpur under Remuna block in Balasore, Pradhan said questioned as to why the state government couldn’t credit the rice subsidy amount to the bank accounts of beneficiaries.

“When the center could directly credit the subsidy amount of LPG into the bank accounts of 17 crore consumers, why the state government could n’t when it comes to transferring subsidy amount to the NFSA beneficiaries,” asked the minister.

He alleged that massive irregularities have been noticed in the selection of beneficiaries, as a result, the poor people are deprived of their rights and the ration cards were grabbed by workers of the ruling party.

“The state government is trying to control the flow of fund to the panchayat and villages, which is sent by the center,” he alleged  and added that the state is dogged by inertia, corruption, and inefficiency.

The people can bring the change if they vote for the right candidate in the coming panchayat elections, he added.