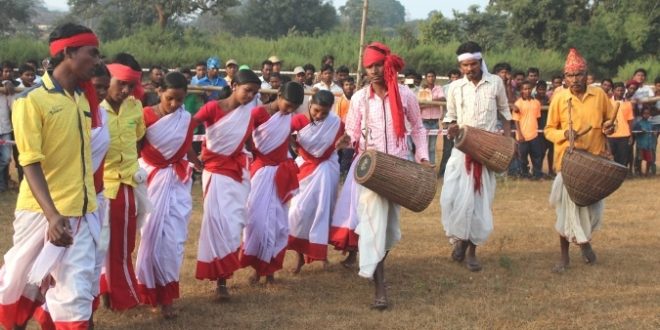 Keonjhar: In a bid to promote and preserve the traditional art & culture of local people in the Keonjhar district, Jindal Steel & Power Ltd (JSPL)’s Barbil Unit organized the one of its kind Tribal dance and rural archery competition at Sialijoda in Joda block.

The innovative competition was aimed at showcasing the inherent talent of the tribal people & its promotion. The event witnessed astounding success with the huge participation of the people from Deojhar, Birkala, Kandra and Asainkala GPs.

Total 64 archers participated in both senior & junior category and displayed their skill with their traditional bow and arrow. Thousands of spectators thronged to the ground to witness the outstanding aiming skill of the local tribal archers. Similarly, 55 artists from three traditional dance troupes exhibit their magnificent talent in folk art & culture.

The dance groups decorated with traditional attire steal the show by presenting different forms of the folk dance. The rural talents performed various forms of tribal dance to the tune of traditional instruments like Mandal, Nagada, and Jumur. One of the artists Shanti Laguri of Jugudidhar village mesmerized all with her exceptional talent.

The unique event organized in a partnership with Ranapratap Youth Association for the first time ever by any corporate in the area was coordinated by CSR Department of JSPL Barbil Unit. Senior functionaries like Mr. V C S Rao, Mr. Manas Dash distributed prizes to the participants in the presence of many local leaders and villagers.