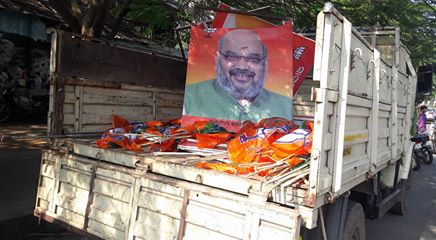 Bhubaneswar: A day before the visit of BJP’s national president Amit Shah to attend a meeting in the capital city of Odisha, the posters and hoarding of BJP were found torn at several places in the city on Thursday.

The incident triggered an outrage among the BJP workers, who resorted to road blockade at the Power House square here and damaged vehicles of Bhubaneswar Municipal Corporation (BMC).

The BJP workers alleged that BJD members and BMC workers have torn the party posters ahead of national party president Amit Shah’s visit to the State.

“They have not removed any of BJD posters in the city but tore off our party posters. Clearly, it is evident the ruling party is scared of our party President’s visit,” said state BJP president Panda.

Sources said police have arrested some BJP workers for vandalising the BMC vehicle.