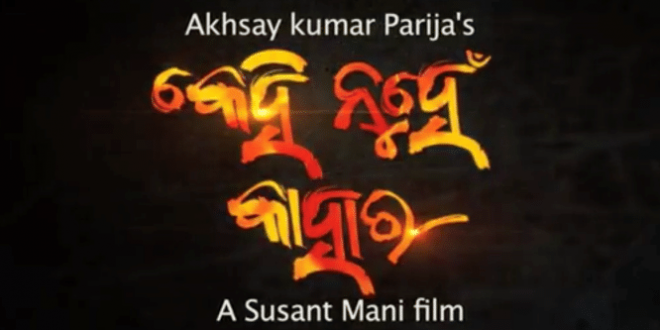 Bhubaneswar: Kehi Nuhe Kahara has been adjudged as the Best Film at the 27th State Film Awards for the year 2015, which was announced on Saturday.

“Irrespective of business mathematics, a film made with passion, honesty , and hard work will always be a good film and will definitely receive acceptance and appreciation,” said Akshay K Parija.

“Thank you Lord Jagannath, thank you the Chairman and Jury Board, thank you Director Susant Mani and the entire team of Kehi Nuhen Kahara, thank you friends and associates who helped and supported this film and thank you Media and Press who unanimously appreciated the film after their rigorous review”, exploded  Akshay Parija emotionally from Dubai on receiving the news.

Labeled as Game Changer of Odia Cinema, Parija first time ever, had thrown an open screening for media and press to see the film in advance before release and requested them to give their candid review, there by  risking box-office results.

“It is suicidal but a challenging initiative which we support for good of Odia Cinema”, wrote Sambad.  “A genuine film with basic story and hard-work can never go unrewarded”, confided Parija confidentially.

“Rewards and recognition are strong motivating factors that will keep us pursue the challenging objective of the revival of Odia Cinema without focussing towards business arithmetic. I am grateful to Government of Odisha  for supporting me in this journey,” added Parija reassuringly.

When contacted, Director of the film Susant Mani was candid to admit that among his total 16 films in the past, “Kehi Nuhen Kahara” was most challenging. “My Producer put one condition to me and that is- I want you to make a good film without thinking of money. I hope he will be happy now with the recognition.”

Interestingly the team of Parija and Susant Mani has one more path-breaking film “Love U Jessica” knocking the doors of audience view and liked to hit the theaters very soon.