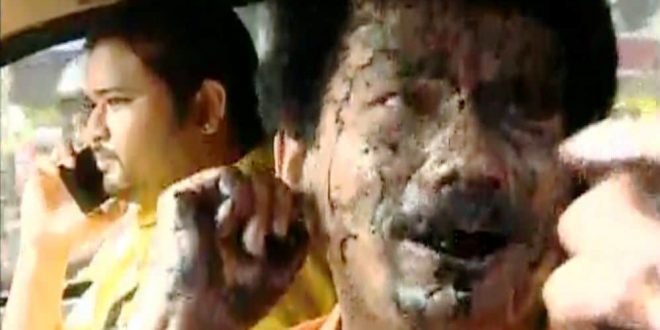 Protesting the over his controversial remark on Lord Jagannath, activists of Lulu Sena threw ink at Papu Pom Pom near Jharpada Flyover on Cuttack road here.

According to reports, the incident took place near Jharpada Flyover here when Papu was returning from shooting set in his car. The comedian was seen apologizing holding his ears inside the vehicle.

They laced ink on his face and body even after he begged excuse by holding ears inside his car. Papu was returning from a shooting set.

“I have no information who threw ink at me. I would not resort taking any legal step. I leave the matter on Lord Jagannath,” said Papu.

The Jagannath Sena had lodged a complaint on Tuesday at Sea Beach police station in Puri demanding his arrest of the comedian. The Sena activists, who burnt effigies of the popular star near Swargadwar raising slogans against him, also had demanded that he must prostrate before Singhadwar and beg excuse.

Notably, while performing stand-up comedy on stage during the closing ceremony of Puri Beach Festival on November 28, Papu had said that basil (tulsi) leaves over which street dogs pee every day are used in the rituals of Lord Jagannath. He further went on to say that those who utter ‘Jay Jagannath’ are sinners, sources said.

Puri Rath Yatra of Lord Jagannath and his siblings begins