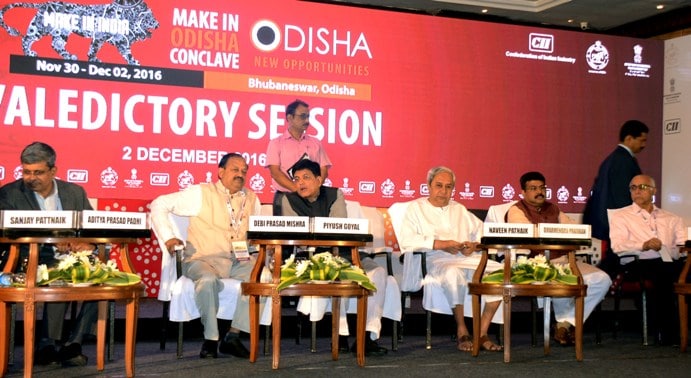 Bhubaneswar:  The Make in Odisha conclave has attracted over Rs two lakh crore investment proposals in the state.

The state has received investment intent of Rs. 2, 03, 270 crore in 10 diversified sectors. These investment intent have the potential to generate more than 1.40 lakh  additional jobs for the people of the state, said Chief Minister Naveen Patnaik said while addressing the industry players during the concluding day of the conclave.

He also announced to organize the conclave biannually to realize its dream of Vision 2025 that envisages to attract investment worth Rs 2.5 lakh and to create employment opportunity for around 30 lakh people.

Out of the total 2.03 lakh crore investment proposal, it received Rs 97,911 crore in the mineral and metals sector and Rs 38,443 crore was received in infrastructure sector.

While it received Rs 2,076 crore in tourism sector, the power and regeneration sector received an investment proposal of Rs 29,932 crore.

The event saw registrations from more than 4,400 delegates from across the country and abroad. The government held more than 220 meetings with investor community across diversified sectors in various States. Furthermore, the conclave facilitated more than 600 B2B meetings among the businesses.