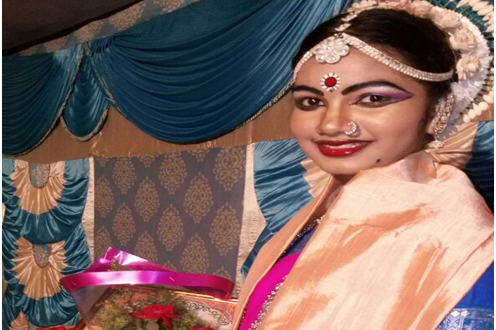 Bhubaneswar: Simran Swain, an inmate of Jindal Bal Bhawan, Angul has been selected for National Bal Shree Honour 2015 for her unbeaten talent in Odissi dance.

She has been selected in the Creative Performance stream of the Bal Shree Scheme, launched by National Bal Bhavan in 1995. She is the first child in Odisha to receive such honour.

She will receive the honour from President of India at the Rashtrapati Bhavan.

Simran, daughter of Pramodini Nayak and Sarbeswar Swain, has been an inmate of Jindal Bal Bhavan and is also a student of O.P. Jindal School, Angul in class-VIII.

After successfully completing the District and State Level competition, Simran represented Odisha in the National Level Bal Shree Competition held at Delhi in November 2016 and has been selected for Bal Shree honour for the first time in the State.

“This is really a matter of pride for Angul and Odisha. JSPL has set up Jindal Bal Bhavan to promote creative skill of children in our vicinity. Achievement of Simran will be a big motivation for other students,” said DK Saraogi, Executive Director ((I/C) and Location Head.

Jindal Bal Bhawan is affiliated to National Bal Bhavan, New Delhi and is running at the Campus of OP Jindal School since 2010.  Presently more than 250 children are actively participating in various programmes organised by Jindal Bal Bhavan.

National Bal Bhavan, New Delhi is an autonomous body fully funded by the Ministry of Human Resource Development. It was established in 1956 to provide opportunities of creative pursuits to children in the age group of 5-16 years.

Objectives of the National Bal Bhavan are to enhance the creative potential of children and to inculcate in them scientific temper and a spirit to challenge, experiment, innovate and create. Presently, renowned Kuchipudi danseuse Shallu Jindal is leading this organisation as its Chairperson.