Bhubaneswar: Bus services to Puri from Bhubaneswar and Cuttack resumed on Wednesday as the Bus Owners’ Association called off its strike after talks with the Puri district administration.

The strike was called off keeping in view of the forthcoming Snana Yatra and Rath Yatra, said the association.

Private buses remained off the road in the route following burning of three buses at Pipili on Monday after an accident which led life of a couple. Irate locals had set the buses on fire after an elderly couple was run over by a speeding passenger bus.

The association had demanded adequate compensation for the damage, waiving the equated monthly installments (EMIs) of the vehicles destroyed in the arson and early arrest of those involved in the torching incident. 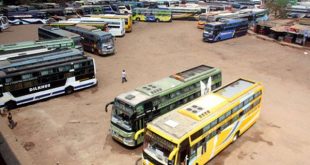