Bhubaneswar: The Commissionerate Police on Sunday imposed section 144 of Criminal Procedure Code (CrPC) on the premises of Utkal University after some miscreants hurled bombs at ladies hostels following a group clash over the ensuing campus polls.

Following the bomb hurling, tension has erupted in the University.

According to reports, low-intensity bombs were hurled at the boundary of ladies hostel No. 5 and 6 this afternoon creating panic among hundreds of students living on the campus.

However, no student was injured in the incident.

The irate students also clashed with the police personnel in front of the main gate of the varsity while the latter tried to pacify the students.

The bomb hurling incident took place a day after a student was attacked inside the campus by a group of students belonging a students’ party.

Meanwhile, a meeting is underway in presence of top policemen and varsity officials on how maintain law and order as well to hold the forthcoming campus elections.

“Now, four platoons of police force have been deployed on the campus and we are trying to bring the situation under control,” said city DCP Satyabrata Bhoi.

The section 144 of Criminal Procedure Code (CrPC), prohibiting unlawful assembly, has been imposed on the varsity campus.

Notably, a PG second year student of Utkal University on Thursday lodged a complaint with Commissionerate Police alleging that she was manhandled and molested by a non-student on Wednesday.

Worth mentioning, BJB Autonomous College, one of the topmost colleges of the state, was closed sine die on Wednesday following pre-poll violence in the campus. 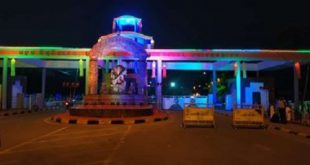