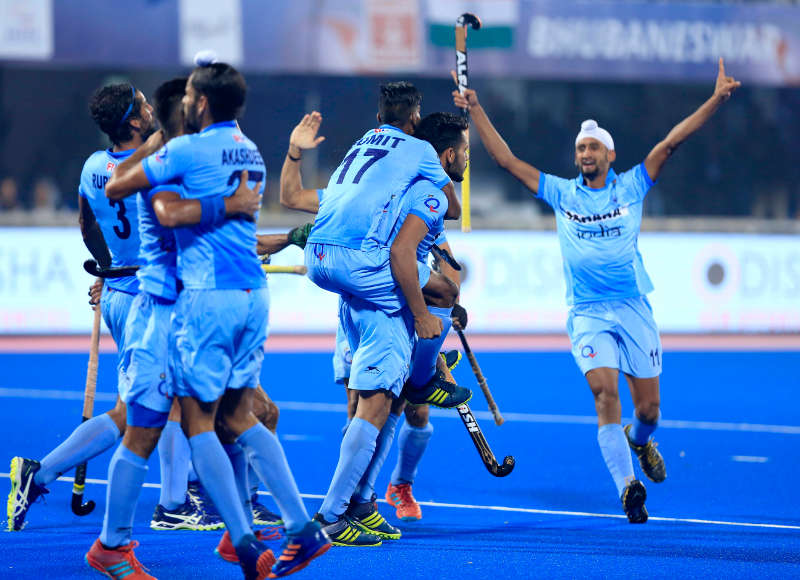 India, who finished fourth in Pool B, claimed a stunning shoot-out victory over Belgium’s Red Lions, a team that came into the contest on the back of three straight victories. Earlier in the day, Australia’s Kookaburras proved too strong for Spain to keep alive their hopes of defending the Hockey World League title that they won two years ago in Raipur.

Australia will face a semi-final meeting against either Germany or Netherlands, two sides that meet in the quarter-finals on Thursday 7th December. India’s semi-final opponents will come from the winner of Thursday’s quarter-final clash between England and Olympic champions Argentina.

The opening match of the day saw Spain (FIH World Ranking: 9), who finished second in Pool A thanks to a victories over European champions the Netherlands and Olympic champions Argentina, looking to continue their excellent form by defeating the reigning world and Hockey World League title holders Australia (WR: 2), whose third place finish in Pool B disguised the fact that they did not lose any of their opening three matches here in Bhubaneswar.

A goal-less first quarter was followed by the second period that was certainly not short of action. Australia had a goal ruled out when Spain made good use of a referral to the video umpire, with the Spanish taking a 1-0 lead moment later when Marc Garcia got a crucial touch on crashed ball into the circle to find the target. Jeremy Hayward restored parity two minutes ahead of half-time with a low and powerful penalty corner effort, leaving the match finely balanced ahead of the two remaining quarters.

A yellow card shown to Daniel Beale resulted in Australia needing to absorb huge amounts of Spanish pressure, but the Red Sticks could not get the breakthrough before the Kookaburras returned to full strength. It proved to be telling, as three penalty corner goals in three minutes early in the fourth quarter killed the contest, with Aaron Kleinschmidt and a double for Blake Govers – who was named Junior Player of the Match, presented by ONGC – putting the defending champions into the semi-finals.

“The push-out, trap and flick was really good today”, said Australia captain Mark Knowles, referring to his side’s ruthlessness from penalty corner situations. “You cannot have a world class flicker if someone cannot push it out flat, and it was very pleasing to the coaching staff.”

The Kalinga Stadium was a cauldron of deafening noise for a belting match between Pool A winners Belgium (WR: 3) and host nation India (WR: 6), who finished fourth in Pool B but produced a stunning performance against their higher-ranked opponents. The lively SV Sunil twice came close to opening the scoring for India in the first half, with the Red Lions having a goal ruled out by the video umpire due to a back stick.

One minute into the second half, the mammoth crowd erupted with joy when Gurjant Singh forced home from close range to give India a shock lead against the pre-match favourites, an advantage that was doubled four minutes later thanks to a ferocious penalty corner flick from Harmanpreet Singh.

The Red Lions were stunned, but regained their composure to score twice either side of the third quarter break. Both goals were penalty corners that came from the stick of Loick Luypaert, who took his competition tally to a remarkable eight in four matches.

India hit back almost immediately when Rupinder Pal Singh scored a penalty corner, but a deflected goal from Belgium’s Amaury Keusters took the score to 3-3 and forced the match into the most entertaining and dramatic of shoot-outs.

India lead the shoot-out 2-0 after three efforts each, but Belgium forced sudden-death by scoring both of their two remaining efforts while India failed to convert. Harmanpreet Singh scored what proved to be the winner while Arthur van Doren was unable to beat India shot-stopper Akash Chikte, sparking scenes of utter jubilation both in the stands and on the field from the home favourites.

“It was a really exciting game, I’d describe it as nail-biting”, said India’s Rupinder Pal Singh after the match. “The crowd were amazing today, they have helped us play a really good game.