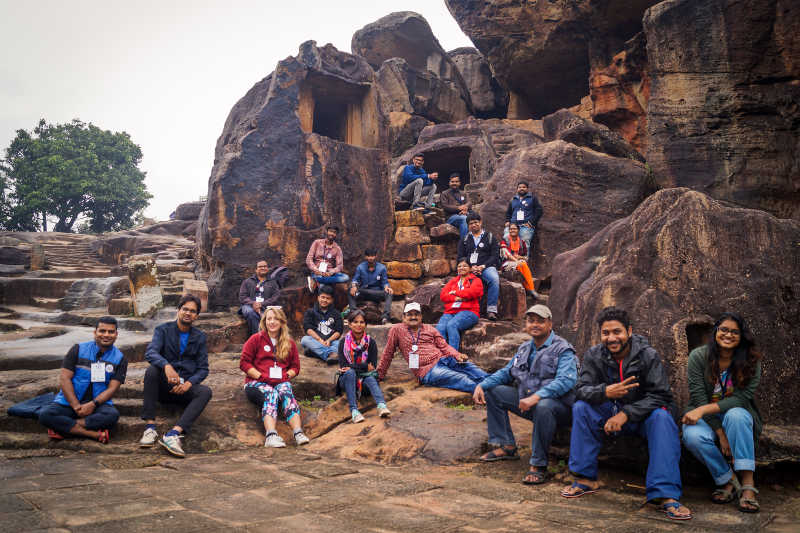 Bhubaneswar: As part of the Ekamra Walks, now heritage lovers and walkers would be another option to explore. The famous Jain shrine and historic Khandagiri-Udayagiri would be the Saturday date for the enthusiasts and today was the maiden walk despite the rains on a stormy winter morning.

However, the footfall was an inspiring 25, including a foreign national and functionary from Wikimedia Foundation.

As a nice start today the early members, who gathered near the ticket counter of the Archaeological Survey of India (ASI) also received blessings of a Jain monk as he was passing by the Udayagiri Hills.

Guide Satyaswarup Mishra nicely narrated the story behind the Twin Hills of Khandagiri-Udayagiri. The beautiful caves, carvings on them, Emperor Kharavela’s stories, love for music and dance, patronage for propagation and popularization of culture and art and also a passion for war and conquering a sizeable portion of the Indian peninsula.

Though at many places the nicely-cut rocks are fighting against the might of weather and the natural degradation process, the stories behind the caves, monks, kings and queens and above all the beautiful performers in the courts of the rulers gave an interesting overview of the the-then Kalingan empire, which was more than lucky to get such a warrior and visionary ruler like Kharavela.

It can be mentioned here that while the hill with a stiff slope on the right-hand side (while coming from Khandagiri Square towards Ghatikia) is Udayagiri, the hill on the left or Khandagiri is also popular not only for its caves and the Jain temple, but all the mischief done by the army of monkeys and the way they snatch away offerings and other food items from the visitors, climbing the steps.

The heritage walk, under the umbrella of Ekamra walks, is also a free walk, as it has become a very popular event in the Old Bhubaneswar area, the Twin-Hills programmes called “Monks, Caves and Kings’’ as per its association of the people from different walks of life from the ancient times to the present era.

However, the visitors have to pay the entry fee as prescribed by ASI and also fees for having a movie and other high-end cameras, while the phones and small cameras are exempted from the entry fee category. Normally for Indian adults, ASI is collecting Rs 15 per person and for foreign national Rs 200, per

Nichole Saad, Education Programme Manager with Wikimedia Foundation, who joined the first edition of heritage walk at the Twin Hills today, said, “It was great. I got to learn a lot of things about Odisha and the carvings in the caves. It was nice to meet local people and it was good opportunity to discuss with the people attending the walk to know the history and the heritage of the city.’’

“I visited the city to attend meetings for Wikipedia Education Programme. This walk is also a great opportunity for the youth to learn about their own heritage and can add value to the open knowledge movement like Wikipedia, Wiki Voice and Commons so that people from all around the world will get to know about the heritage community of the city,’’ she added.

“After the Old Bhubaneswar, the addition of the Jain shrine and monument in the list of heritage walk has given the weekend walks a new dimension. As the city is known for its co-existence of Hindu, Jain and Buddhist religious elements, we must have another heritage walk around Dhauli with the Buddhist focus and design,’’ said Sweta Mishra, a walker. 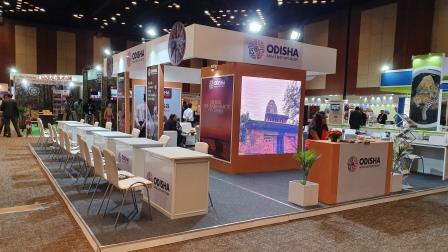 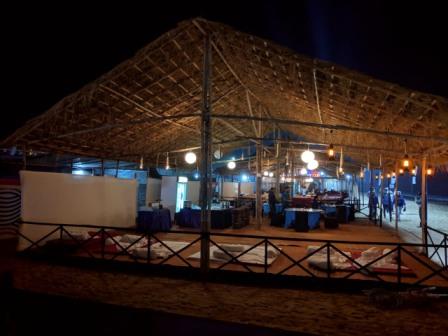