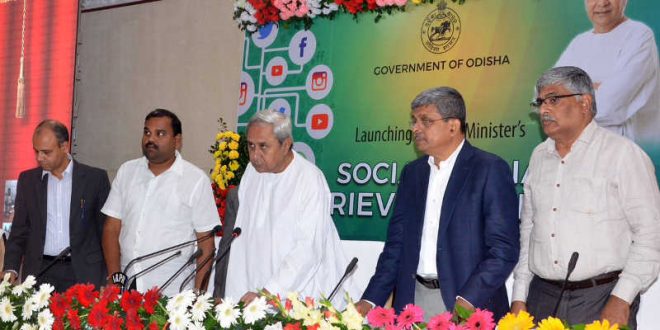 Bhubaneswar: Odisha Chief Minister Naveen Patnaik on Wednesday launched an innovative social media grievance handling mechanism to rejuvenate the government-public interface and create a strong bond of trust between the government and the people.

The social media grievance handling mechanism includes a Web Portal as well as a Mobile App. It is an internal mechanism of the government to effectively manage people’s grievances.

“Today we’ve launched a programme of fast redressal of grievances and this will apply to all officers and certainly will mean that the complaints and grievances will be addressed much quicker,” said the Chief Minister while launching the new social media system for grievance redressal.

The Chief Minister said he would personally monitor the performance of officers in attending the grievances of people on social media.

The Chief Minister said he would personally call both the green and red marked officers to thank or suggest improvements as the case may be.

It will also be a measure of government’s sensitivity and empathy towards citizens’ needs and concerns.

It may be informed that the Chief Minister’s followers on Twitter have touched 1.5 million. The combined social media connectivity on both Twitter and Facebook is more than two million.

Odisha Electronics & IT Minister Chandra Sarathi Behera said, “OCAC and IT Department have coordinated the venture and after compiling all this platform has been created. Whatever grievances are coming from the people, all will be compiled and each grievance relating to the specific department will be addressed with quick action.

Even the problem relating to the district and its particular department there will also be looked after. Accordingly, it will be forwarded immediately to the Collector concerned and the office.”