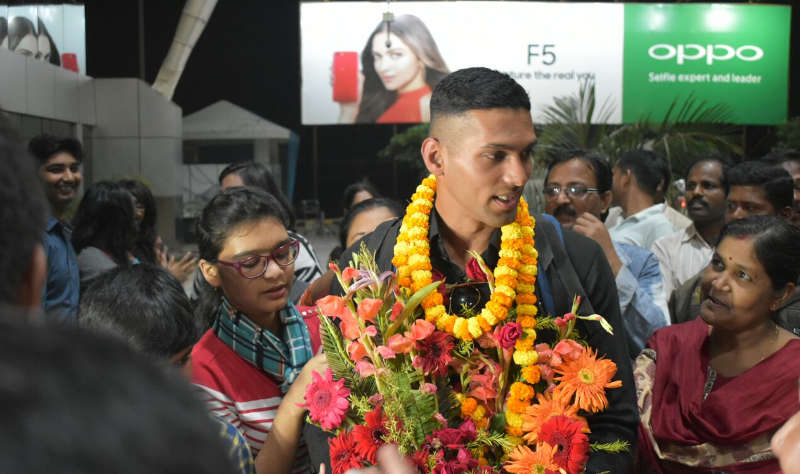 Bhubaneswar: Chandrakant Acharya, who won the prestigious sword of honour, was given a rousing welcome after he arrived at the Biju Patnaik International Airport (BPIA) here on Tuesday.

The welcome banner of Air Force Association Odisha Branch, Armed Forces Veterans of Odisha and Indian Ex-Services League Odisha waited at the Biju Patnaik International Airport (BPIA) much before the Indigo flight 6E 211 landed at the runway of the Temple City.

Well-wishers from all walks of life, retired officers from armed forces and their families, own family members and kin were waiting there to accord a deserving reception to the Son of the Soil, who held the name of Kalinga at a new high as the land of warriors was always known for its gallantry since ancient times.

Hundreds in numbers with flower bouquets and garlands lined up near the arrival lounge of BPIA and to have a glimpse of the hero Lieutenant Chandrakant Acharya as he landed at the airport to receive a massive public reception at his home turf after making Odisha proud with winning the Gold Medal and the Sword of Honour Award at the Indian Military Academy, Dehradun. 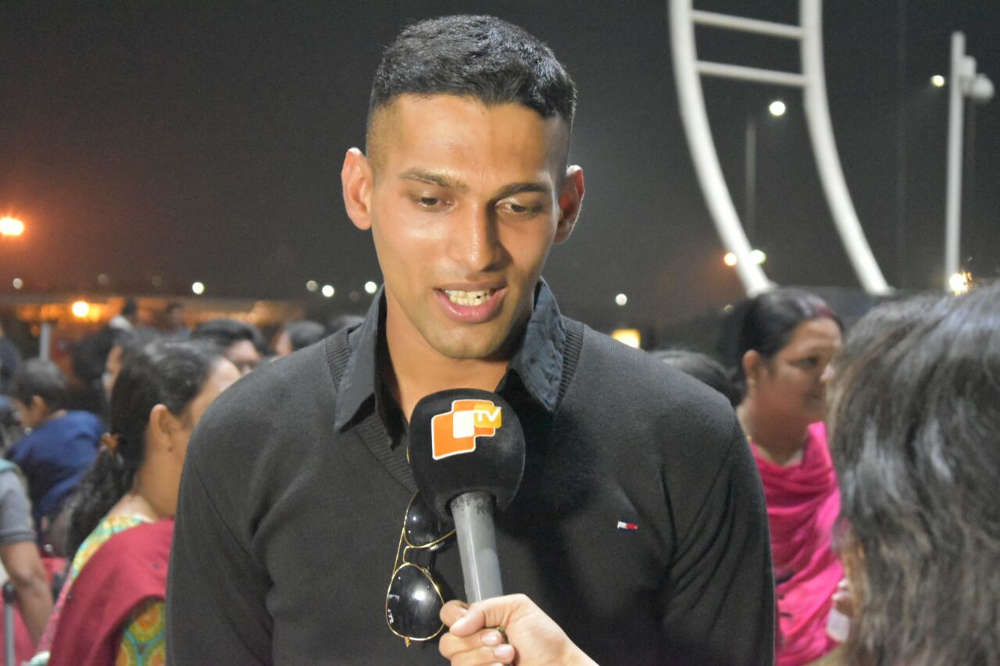 Members of Air Force Association Odisha Branch, Armed Forces Veterans of Odisha and Indian Ex-Services League Odisha, their families upon his arrival greeted the young officer and after the brief ceremony escorted the hero to his home.

The Air Force Association banner quoted “the Air Veteran of Odisha are proud of your stellar performance on passing out from the Indian Military Academy (IMA ) awarded with the Sword of Honour for best of all gentlemen cadets. All Air Veterans and their families wish you a brighter career ahead.’’

The Armed Forces Veterans of Odisha in their welcome line on the banner said “all the best for the turbulence free sailing to scale the heights of success and touch the sky with glory in your career.’’

A city boy from Sailashree Vihar, who studied at DAV Public School, Chandrasekharpur from LKG to Class VIth, Chandrakant cleared his entrance for Rashtriya Indian Military College, Dehradun by competing with Class VIIth students, while he was still at DAV in Class VIth.

Chandrakant joined the RIMC, Dehradun, in 2007 and completed his course from Class VIIth to Class XIIth over there. He had secured all-India rank (AIR) 6 in RIMC entrance.

He passed out from RIMC in 2012. Then he cleared his National Defence Academy (NDA) examination in the 4th attempt after being disqualified thrice. He qualified because of the able guidance of his RIMC Commandant, who stood along with him during his bad times.

Born to Dr.Ajay Kumar Acharya, Associate Professor, Botany at SVM College, Jagatsingpur and mother Sukruti Rath a housewife. His mother, a post-graduate in science from Ravenshaw College, Cuttack, is the main source of inspiration, his academic mentor and his mental strength also.

In 2012 Chandrakant had joined NIT, Uttarakhand, to pursue Engineering. In 2013 he got into NDA leaving cosy and easy engineering line to work for the country and to become a selfless warrior.

For the youngsters from Odisha and across India, Lt. Chandrakant Acharya message is: “Work hard to achieve your aim and don’t give up. Make your parents and your country proud…’’.

“Lt Chandrakant should lead from the front and bring a lot of laurels to his self, parents, State and Country with his patriotism and nationalism passion. Wish him great success for his bright future,’’ said an elated Srikant Sahoo, maternal uncle of Chandrakant.