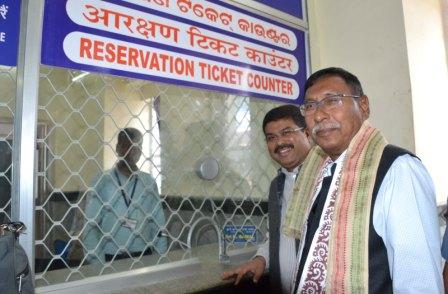 The new buildings at these two stations have reserved and unreserved ticketing system besides modern amenities for passengers.

“The Narendra Modi Government has done “unprecedented” work in the last three years for the development of the railway sector in the eastern region of the country,” said Gohen.

He also informed that the Modi government has been laying emphasis to strengthen the rail network in Odisha but the State itself is creating hurdles by not acquiring the land timely.

“Over Rs 5100 crores have been sanctioned for the development of railway infrastructure in Odisha during 2017-18 financial year, but various railway projects  are not being completed in time due to land acquisition problems and other issues under State subjects which need to be addressed by the Odisha government,” the Union Minister claimed.

Speaking on the occasion, Dharmendra Pradhan said, “PM Narendra Modi has special plans for the expansion of National Highways, better air connectivity, development of railways in Odisha and Bhubaneswar. There is a need to convert Bhubaneswar into an international city.”

Pradhan also said that there are plans to construct third foot over bridge worth Rs 6 crores at Bhubaneswar railway station and two new ring roads.