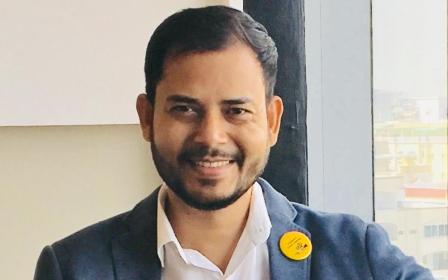 Bhubaneswar: Filmmaker Jitendra Mishra is invited as a jury for the MICE -Mostra International Cinema Education film festival in Valencia, Spain, going to be held from 10-24 February this year.

This festival is considered to be the most important International Festival of Educational Cinema in Europe. It is a space where international and local students and teachers participate and express themselves through cinema.

MICE is an audiovisual space that entertains while educating participants in filmmaking where one can share their experiences and audiovisual work with others, said a release.

Children and youth enjoy international and Valencia productions, both by professionals and those produced by students in classrooms.

Workshops, presentations, concerts and a wide range of activities will provide learning opportunities for students, training for teachers and fun for the whole family, the release added.

Mishra said, “I was an average student during my academic career. Now, it gives me enough encouragement when I am being invited to judge films made by University students, that too in a European country.”

“It always opens doors to opportunities in terms of international exposure and networking for our own festival SIFFCY. I am planning to invite few best films of this festival to our festival this year,” said Mishra.

Josep Arbiol, Festival Director of MICE, said, “It’s a great privilege to have such talented profession Jitendra Mishra as a jury in our festival this time. it’s an opportunity to exchange art, culture, values and ideas between our two nations through cinema and strengthen our cultural relationship”.

Born in Odisha’s Titlagarh, Jitendra Mishra is one of the few Indian film producers & promoters who has been able to create a benchmark in ‘Alternative method of Film Production, Distribution & Promotion’ at international level.

He has already been associated with the production, distribution and promotion of more than 110 films in all categories.