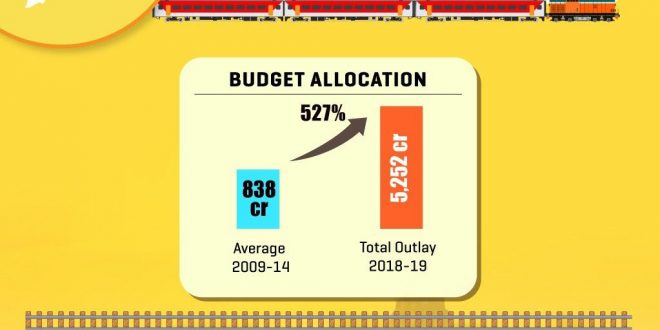 It received an additional Rs 150 crore compared to last year’s budget, which is highest ever allocation to Odisha in any Railway budget. In 2017-18, Odisha had received Rs 5102 crore for the Railway sector.

The Odisha government had made a demand of Rs 6,500 crore before the Centre for railway infrastructure development.

Chief Minister Naveen Patnaik had written to Railways Minister Piyush Goyal much prior to the budgetary allocation and presentation of the Railway Budget merged with the General Budget.

While Rs 5,252 crore has been allocated for Odisha, the East Coast Railway (ECoR) received 6563 crore.

ECoR general manager Umesh Singh informed that the allocated fund would be utilized for the development of existing railway network while several new lines would be created and modernization of railway stations would be carried out.

“The budget allocation has disappointed us. While we had asked for Rs 6,500 crore, the central government has allocated Rs 5,252 crore, which is just 2.9% increase against last budget allocation,” said the Transport Minister.

He also said the Railway has failed to utilize the fund allocated last year.