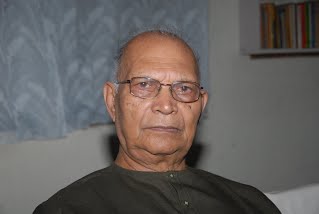 Bhubaneswar: Eminent litterateur Chandrasekhar Rath on Friday passed away in Bhubaneswar. Rath died at the age of 89.

He breathed his last in a private hospital on Friday while undergoing treatment as he was suffering from prolonged illness.

Chandrasekhar Rath, among the front –liners in Odia literature, is a fairly well-known name both in the field of fiction and non-fiction for more than five decades.

He took off as an essayist or, to be more precise, rather as a reflective writer in poetic prose and that very year he was honoured by Dr Harekrushna Mahatab’s  ‘Jhankar ’ with the annual Vishnu Award.

He received a couple of Sahitya Academi Awards, a prestigious Sarala Award and the Central Sahitya  Akademi Award.

He also won The Hutch Crossword Book Award in 2004 for Yantrarudha translated into English as Astride the Wheel published by Oxford University Press and  Sahitya Bharathi in 2012- a lifetime achievement award.