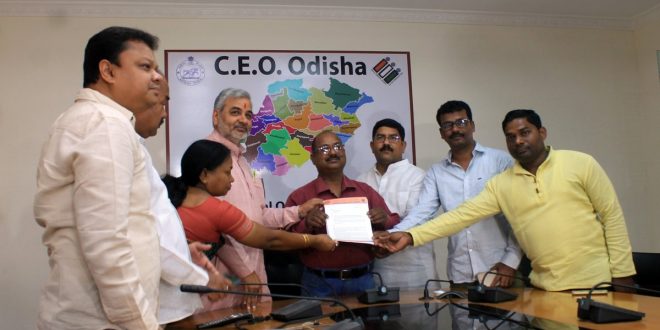 Bhubaneswar: A day-after Rs 40.5 lakh of unaccounted cash was seized from an SUV by Bargarh police, the Bharatiya Janata Party (BJP) and Biju Janata Dal (BJD) on Sunday accused each other of using the money for the Bijepur by-poll.

While BJP leaders filed a complaint with the Chief Electoral Officer (CEO) alleging that the Bargarh district administration was working to favour the ruling-BJD in the upcoming Bijepur by-polls, the ruling party blamed the BJP.

Two persons have been arrested following the seizure of the unaccounted money.

A BJP-delegation led by spokesperson Sajjan Sharma alleged that the money was being illegally transported to Bijepur for BJD’s election campaign.

“The district administration and police have hoodwinked the public. We demand a thorough inquiry which would unravel the source and destination of the illicit cash,” Sharma said.

On the other hand, BJD-Vice President Surya Narayan Patro dismissed the allegations levelled by the BJP.

Meanwhile, the Vishwa Hindu Parishad refuted the claims of the BJD and denied any links with Agarwal.

On Saturday, Padampur police seized Rs 40.5 lakh from a car while it was on its way from Padampur to Bargarh at Mahulpali police check post. The police found the cash concealed in the car and detained Rajesh Agrawal who was carrying the money.

Sources said Agrawal failed to provide a satisfactory answer on the source of money. The cash was meant for use in Bijepur by-election by the BJP.