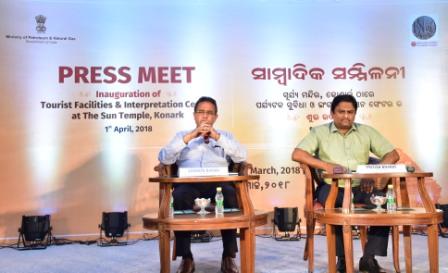 “The Tourist Facilitation Centre is laced with adequate parking bay for buses, cars and two-wheelers of the visiting tourists, driver’s facility block, ample public amenities like cafeteria, toilets and drinking water etc. The main avenue leading to the temple from outer ring road has been developed with paver block, water bodies and suitable landscaping,” the CEO claimed.

The Interpretation Centre has been designed to be user-friendly and interactive, with multiple exhibits and multimedia displays. Boasting five galleries depicting the history, culture and architecture of Odisha, the Interpretation Centre also features galleries dedicated to the many Sun temples in India and across the world. Touch-screen kiosks and multimedia depictions, together with sculptures, scale models and artefacts in the five galleries make for fabulous viewing.

Visitors will be left spell-bound with the fusion of sight and sound at the 60-seater auditorium with state-of-the art audio-visual and acoustics systems. Here, animated films depicting the origins and history of the Sun Temple at Konark will be stellar attractions.

A VIP lounge, a cafeteria, and a welcome lobby with ticket counters will all add to the excitement. All the facilities are covered with CC TV cameras and appropriate fire-fighting facilities ensure safety for all.

Billed as an architectural marvel of Eastern India and an exceptional symbol of India’s glorious cultural heritage, the Sun Temple of Konark in Odisha is one of the important tourist attractions in the region.

Built in the 13th century, the Konark temple was conceived as a gigantic chariot of the Sun God, with 12 pairs of exquisitely ornamented wheels pulled by seven horses. Majestic in conception, the temple is indeed one of the most sublime monuments of India, famous as much for its imposing dimensions and faultless proportions as for the harmonious integration of architectural grandeur, fine traceries and scrollwork.

As the Sun Temple stands as a testimony to our centuries-old heritage, there is an urgent and pressing need to re-connect the masses – especially the youth – with the rich culture and history of Odisha. This necessitates further development of this UNESCO world heritage site so that visitors can explore it in greater detail and spend quality time discovering its many facets.

This led the Indian Oil Foundation, a non-profit trust formed by Indian Oil Corporation, to set the stage for creating world-class infrastructure facilities for Indian and foreign tourists alike.

IOF’s pioneering work under the guidance of the Ministry of Petroleum & Natural Gas has made a radical improvement to the entire complex. Creatively planned and constructed in association with Engineers Indian Limited (EIL), the Tourism Department of Orissa and the Archaeological Society of India (ASI), it has evolved into a multi-faceted tourist hub.

The sprawling Main Avenue leading from the outer ring road to the Sun Temple has been beautified with artistic landscaping.  Elegant water bodies have been developed along the way, with well-manicured gardens, water-bodies, paved roads, ample streetlights and high-mast towers adding a touch of class to the entire set.

To make a visit to Konark comfortable, IOF has developed an extensive Main Parking Area for tourist buses spread across five acres. This facility has space for 60 buses and modern washroom facilities have also been made available here alongside relaxation facilities and snacks counters for the bus drivers and others.

The crowning glory is the world-class Interpretation Centre, spread across eight acres. Developed as a new-age museum, the Interpretation Centre uses different means of communication to aid and stimulate the discovery process while enhancing the visitor’s intellectual and emotional connection to the site.