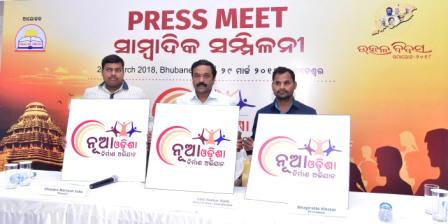 Rath said that more than 10,000 Odia youth are going to take a pledge before the Sun God and Sea in the name of great heroes who played leading role in the formation of Utkal Pradesh and announce the launching of ‘Nua Odisha Nirman Abhijan’ before sunrise at Chandrabhaga Sea beach on that day.

Union Petroleum and Natural Gas Minister Dharmendra Pradhan is slated to inaugurate this majestic and unique programme for the youth.

Rath also added that thousands of youth will travel towards Chadrabhaga after getting the divine blessings (Agyan Mala) from Lord Jagannath Temple, Puri,  Kakatpur Maa Mangala Temple, Sakhigopal and Bhagabati Temple of Konark in the night before Utkal Divas celebration.

Worship of the Sun God will be performed at Chandrabhaga before sunrise. Union Minister Dharmendra Pradhan will preside over the worship ceremony along with thousands of youth and offer prayer to the Sun God.

After the worship of the Sun God, Upendra Maharana, the successor of Bisu Maharana and Dharama who are related to the great heritage of Konark Temple will administer pledge for ‘Nua Odisha Nirmana Abhijan’, stated Rath.

Famous Odia singers will perform during this event and a small video film on New Odisha will be exhibited as part of this celebrations.

Before the independence in the year 1936, the state of Utkal Pradesh was formed as an independent state after a prolonged protest for the formation of country’s first linguistic state. This marks the celebration of auspicious Utkal Divas.