To mark the occasion, the company celebrated the day with a function at Bhubaneswar, which reflected a distinct spirit of Odisha.

While addressing the gathering, NALCO CMD Tapan Kumar Chand lauded Mines and Refinery Team for achieving 100% capacity utilization in Mines and Refinery. “Starting of new Mines-South Block Panchpatmali is a bold step. After being credited for the lowest cost producer of alumina in the world, NALCO has done Odisha and the country proud again by clocking the highest ever bauxite excavation of 70.84 lakh tonnes since inception and also the Refinery team has done a commendable job by producing 21.11 lakh tonnes, which is also the highest ever since inception,” said Chand.

NALCO has ended the financial year 2017-18 on a strong note with smelter collective producing cast metal of 4.25 lakh tonne, registering a growth of 9.8%.

The total sales of the company also registered sharp growth with sales of 4.26 lakh tonne and 42 alumina shipment exports, enabling the company to achieve the highest turnover ever since inception.

“My compliments to finance and production teams for settling water dispute with the state government. The project team has achieved the distinction of getting lease transfer for Utkal-D land and environment clearance for Caustic Soda Plant in Dahej, Gujarat,’’ Chand added.

Shaktikanta Das, Former Economic Affairs Secretary and presently the member of the 15th Finance Commission of India, and India’s Sherpa to the G-20, said, ‘’We live a dynamic environment and the world around us is changing at a rapid rate. The role of industries in shaping a New India is immense. It is very important for the industrial sector in India to adapt to the latest technological innovation and lead the developmental charge of the nation.’’

Das also praised NALCO for scaling greater heights with each passing year, saying, ‘’NALCO is a jewel among the public sector enterprises and is also playing the role of a Mother industry in Odisha.’’ 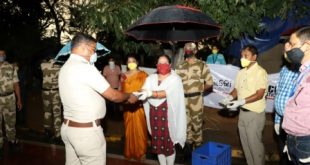