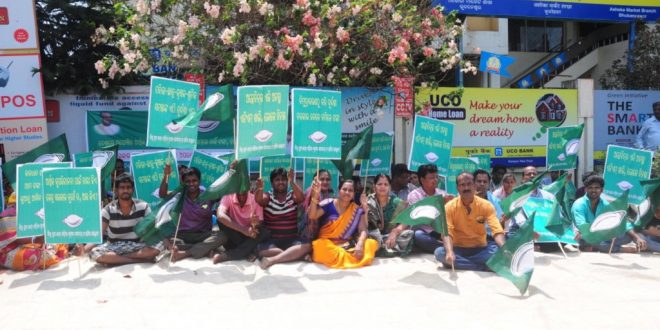 Bhubaneswar: The ruling BJD on Saturday observed a two-hour silent protest near the Reserve Bank of India (RBI) regional office here and in front of nationalised banks across the state protesting against the cash crunch in ATMs.

BJD MLAs and workers sat in silent protest in front of the nationalised banks in Bhubaneswar, Cuttack and other parts of the state from 10 am to register their protest against the cash crunch.

While the demonstration remained largely peaceful, some BJD workers barged into the SBI Regional Office during the protest. However, no damage to the property was reported.

“Demonetisation has failed to achieve its basic objective of bringing back the black money to the country. Lack of proper planning before demonetisation initiative has given rise to the situation of today in which farmers, students and poor reamin to be the worst sufferers. Currency notes of Rs 2,000 denominations have vanished from the market for past few days resulting in an undeclared ‘financial emergency’ thrust upon the people. We protest it,” said former minister Sanjay Dasburma.