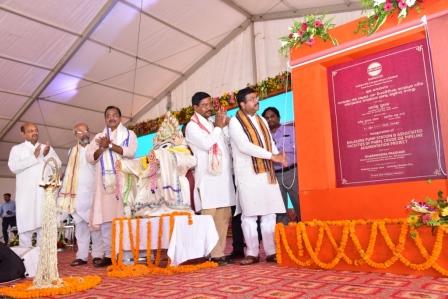 Indian Oil is having the biggest and largest crude oil handling facility of 37 MMTPA in the East Coast of India at Paradip with 3 Single Point Mooring System which is installed in deep sea at a distance of 21 km from the seashore.

Inaugurating the event Union Minister of Petroleum & Natural Gas, Skill Development & Entrepreneurship Shri Dharmendra Pradhan said, “The PHBPL Pipeline is acting as the energy highway to entire Eastern & North-Eastern region of India supplying crude oil to 5 refineries namely Paradip, Haldia, Barauni, Bongaigaon & Guwahati. Also in future it is envisaged to feed crude oil to Numaligarh refinery in the NE Region. This crude pipeline will reduce the positioning cost of crude at the above said upcountry refineries by about Rs 300-400 Cr per Annum.”

Paradip is having one of the biggest crude oil storage facilities having 31 number of crude oil storage tanks of capacity of 60,000 kiloliters each. This will ensure uninterrupted supply of Crude Oil to all Eastern Region Refineries of IOCL. This newly constructed Balasore Pump Station with all State of Art facilities will play a key role in feeding all those refineries.

For augmentation of PHBPL, IOC has invested Rs. 586 Crores project for four states (Odisha, West Bengal, Jharkhand & Bihar ), out of which Rs. 321 Crore has been invested in Odisha only.

This is the 1st LPG Pipeline in the Eastern India being laid by Indian Oil Corporation.

The Paradip-Haldia-Durgapur LPG Pipeline is envisaged to cater to the LPG demand of the states of Odisha, Jharkhand & West Bengal. The 710 km long pipeline is originating from Paradip in the state of Odisha and terminates at Durgapur in West Bengal.

A total of Rs. 400 Crores has been invested for this project in Odisha.

With the commissioning of 157 Km of 10.75’’ Diameter Paradip-Balasore section pipeline, construction of  Pump station at Paradip and Delivery station at Balasore the road transportation of LPG from Paradip is eliminated thus reducing carbon emissions and traffic congestion. This can be visualised from the fact that about 1.3 Crore gas cylinders are going to get filled at Balasore LPG bottling plant.

From the environmental point of view this project would result in reduction of Co2 emission to the tune of 16 lac MT per annum.

Odisha LPG demand for IOCL is projected as 150 TMTPA for FY 17-18 and installed capacity till FY 16-17 was 90 TMTPA. Current sourcing of Bottling Demand for Odisha State is also being met from nearby Plants located at Vizag and Jamshedpur. Our consumer strength was 20.2 lacs in May 2014 has rapidly grown to 61 lacs as of now and is expected to reach about 80 lacs by the year end, this enhanced bottling capacity will meet the additional requirement of Odisha.

Capacity Augmentation Project having approved cost of Rs.8.3 Crore was planned in FY 15-16 for enhancing Production from 60 TMTPA to 120 TMTPA. With this the total bottling capacity is expected to be about 1.30 cr cylinders per year ( 65 lacs currently)

Commissioning of new Bottling facilities shall result in overall Bottling Capacity of 180 TMTPA for IOCL at Odisha making it self-sufficient to meet enhanced demand due PMUY.

LPG Pipeline connectivity from Paradip Refinery by PHDPL has made Bulk Supplies secure and loading of TT(s) to nearby bottling plants shall improve LPG situation in the entire region. The project cost has been completed at cost of Rs. 3.28 Crore which shall be beneficial for Public in entire Region.