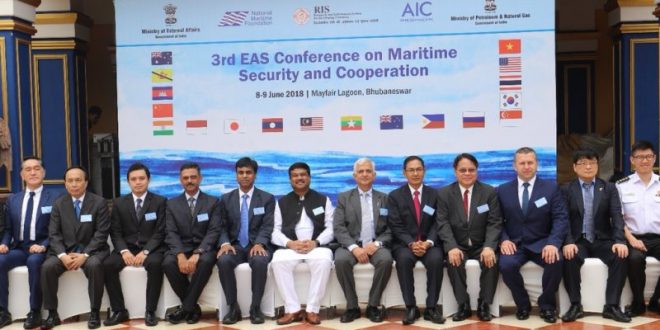 “Odisha is a state with many strategic ports and waterways that could potentially lead to it becoming a premier maritime state that links South Asia with South-East Asia and East Asia,” said Pradhan.

He said Paradip Port could make Odisha a spring-board to India’s Act East and also strengthen maritime links in the Indo-Pacific.

The Minister was addressing the third East Asia Summit (EAS) conference on maritime security and cooperation. The conference was attended by representatives of 18 countries.

“Work is going on as part of a 20 billion dollar investment, only in 2 ports of the state, in Paradip and Dhamra. There is fast pace work going on in areas like refinery, petrochemical, LNG terminal, a multimedia logistic park and port expansion,” said Pradhan.

This provides an investment platform for nations flanking our east and beyond and also a gateway for trade to enter India, he added.

He said once the petrochemical complexes in Paradip are operational, India will be able to export synthetic yarn to Vietnam from Paradip and such transactions could become a norm connecting Paradip with other south-east nations.

Reminding Odisha’s maritime relations with other countries, Pradhan said people in the state celebrate ‘Baliyatra’, which literally means a ‘Voyage to Bali’ in Indonesia in November every year.

It is a popular festival in Odisha that commemorates a traditional farewell that used to be accorded to the brave sea-farers of yore on the eve of their annual voyage to islands like Bali, Java, Borneo, Sumatra in Indonesia and Sri Lanka for the successful trade.

“Bali yatra is not only a ritual of sailing of boats but it also represents the ancient maritime tradition of our state and its economic glory,” said Pradhan.