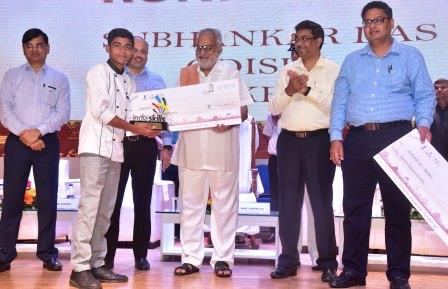 Bhubaneswar:  After 3-days of a great display of passion and grit, the Eastern Chapter of IndiaSkills Regional Competitions 2018 concluded on Tuesday in a grand ceremony, held at Siksha ‘O’ Anusandhan University, Bhubaneswar.

Congratulating the winners, Prof. Ganeshi Lal said, “It has been a proud moment for us to host the Eastern Chapter of IndiaSkills Regional Competition 2018 in Bhubaneswar. Till now I had been addressing Odisha as a state which is natural, cultural and spiritual. I would now add by saying its skilful too. I congratulate and welcome all contestants who have come here and displayed their passion for their skill”

“Evolution is the only constant and evolution through skills will empower the youth to become stronger and more successful. If we continue treading this skill journey which has been envisioned by our Prime Minister, India will soon surpass countries like China who are known for their productivity,” said the Governor.

Addressing the closing ceremony, Rajesh Agrawal, Joint Secretary, Ministry of Skill Development and Entrepreneurship said, “IndiaSkills today is synonymous with aspiration and quality in skills. The WorldSkills competition are held at global standards every once in two years and this would be India’s 6th participation in the competition; and through these India Chapters, we ensure that these standards of skilling percolate down into our ecosystem.”

More than 225 competitors across 27+ skill trades competed in one of the biggest skill competitions in the region. The participants were from seven states, including Odisha, Bihar, Assam, Nagaland, Tripura, Jharkhand and Meghalaya.

“India’s skill training programmes are not only to equip youth with marketable skills to make them employable. It is an initiative to train them to become self-employed or take up entrepreneurship. A combination of factors has made skill development an important policy priority for India,” Agrawal added.

IndiaSkills competition, organized by National Skill Development Corporation (NSDC) under the aegis of the Ministry of Skill Development and Entrepreneurship (MSDE), has brought together 50+ corporates and academic institutes, along with 22 state governments all with one vision of making India the skill capital of the world.

Since April this year, 500+ district and state level competitions have been organized across India. The eastern chapter of IndiaSkills regional competition is the fourth and the last competition held.

The winners from these regional competitions will compete at the National Competition, where the final winners will get a chance to undergo best in class industry training and represent India at WorldSkills International Competition 2019 in Kazan Russia.