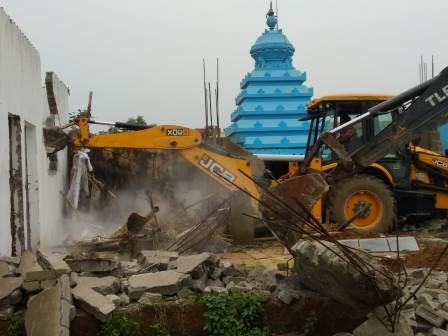 Bhubaneswar: The joint eviction drive of BMC-BDA over the encroachment in Nayapalli Haza was completed on Tuesday with the demolition of over 5,000 square feet three concrete structures, illegally built over a reclaimed land, created out of dumping of construction and demolition (C&D) waste.

Today’s demolition will pave the way for the renovation of the Nayapalli Haza, which was earlier spread over more than 7 acres of land and currently, remained less than 1.5 acres due to illegal encroachments from almost all sides.

Siltation has also contributed towards shrinkage of the area of the water body, which once had a much more power to contain the rainwater of the entire Nayapalli catchment. The natural Drainage Channel No. 10 is also originating from here near Nayapalli Haza.

Additional Commissioner-cum-Member Enforcement BDA Bhabani Shankar Chayani, who with other officials of BDA and BMC led the enforcement drive, said, “So far this would be the biggest eviction drive in the city to revive a water body from encroachment and also creating a wonderful facility where the entire water from the Nayappali catchment would be collected and then treated scientifically so that purified water would flow downstream through the Drainage Channel No. 10, which, ultimately takes the water load to Gangua `nullah’ on the city outskirts.”

It can be mentioned here that under construction fly-ash brick structures were demolished yesterday by the joint squad before lunch. The operation was later stalled due to heavy rains. In fact, yesterday’s joint operation was carried out without the help of Nayapalli Police.

It was learnt that as per the new drainage plan of Nayappali area, the redistribution of drainage water into three channels would be up to their discharge point into Nayapalli Haza. This would help in solving the problem of flooding and ponding of downstream habitations of Behera Sahi.

As a large patch of land adjoining Nayapalli Haza appears to be unauthorisedly occupied, the land status will be checked and steps would be taken to get all the government land and to include them in Nayapalli Haza, without any compromise.

The drainage division of BMC will prepare a comprehensive plan for the development of Nayapalli Haza with best in class natural treatment processes. This may include floating wetlands, constructed wetlands, sedimentation tanks and water bubbling or aerators. The objective would be to discharge treated water into Drainage Channel No. 10, which originates from the water body from the heart of Behera Sahi.

On the other hand, a width of 12 metres of the natural Drainage Channel No. 10 shall be maintained from its origin up to its meeting point under Bidyut Marg near “The World’’ shopping complex. For this purpose “Stop Construction’’ notice shall be issued against the buildings and real-estate developers and it shall be ensured that no construction activity is allowed until the entire width of 12 meters for the Drainage Channel No. 10 if identified through measurement.

The joint eviction process was carried out in presence of Nayapalli Police. While three excavators were used during the eviction drive, three platoons of male police, one platoon of female police and four squads from BDA-BMC Enforcement Wing were present.