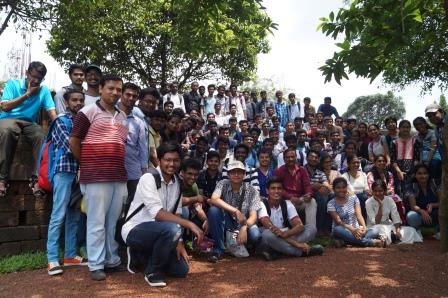 The heritage trail got a pack of 100 guests including 90 students from IIT Bhubaneswar. The sojourn at the Crafts Museum, Kala Bhoomi got the company of renowned hockey star Dilip Tirkey, who promoted the upcoming Men’s Hockey World Cup to be held in the city in November-December this year.

Prof Kishore Kumar Basa, a renowned expert in Anthropology and Archaeology, delivered a talk on the subject ‘Museums in India- from Colonial Constructs to Post Colonial Engagements’ on the occasion.

Akankshya, a native of Mumbai and student with IIT Bhubaneswar was of the opinion that the guided heritage tour in the Old Town area of the city was quite informative for the visitors, faculties and students.

Saif Ali Khan, a student of IIT Bhubaneswar, said, “The heritage trip to Old Bhubaneswar was really an eye-opening experience with the ancient Kalingan architecture and old world charm weaved together with a dose of traditional feeling, the stories behind temples and holy water body Bindusagar and also the medicinal plant garden Ekamra Van, all were very specially and nicely explained by the guides in an interactive and educative format.”

Amritendu, an assistant professor with IIT Bhubaneswar, said “I am working with this premier institution for last four years, but did not have an opportunity to explore the Old City. I was really happy to come and explore so many things in one go.”

Debaprotim Bose, an assistant professor with IIT Bhubaneswar, who mostly did his studies in IIT Mumbai in the past, said, “Being new to this region and the city, my experience was very interesting and I would recommend the Ekamra Tour to my students in future as well. This was indeed a very educative trip with history, architecture and traditional knowledge packaged nicely in a short trip.’’

In his talk on “Museums In India – from Colonial Constructs to Post Colonial Engagements”, Prof Basa, former director at Indian Museum Kolkata and Indira Gandhi Rashtriya Manab Sangrahalay, aptly described how the European concept has come to India and gradually growing a people-centric movement to become a kind of knowledge hub involving history, archaeology, anthropology, science, technology, development and popularization of science.

He, however, advised the museum professionals to have a dedication for the movement as they are at the helm to contribute a lot towards nation-building by disseminating knowledge through the display at the museum galleries.

He also called for a selfless attitude towards the growth and popularity of museums as they are the modern temples and institutions educating people on the various evolutionary processes in all fields and philosophies of life.

Renowned hockey player Dilip Tirkey, while promoting the hockey theme as Chairman of Odisha Tourism Development Corporation also praised the Museum Walk as it has given a new dimension to museum tourism in the part of this world.

The famous war dance from Khurda ‘Paika Nrutya’ was staged by a troupe from the historic town, which was once known for its heroic past and warfare with the British and the Khurda Fort for its stand as one of the last citadel of heroic actions against the foreign force.