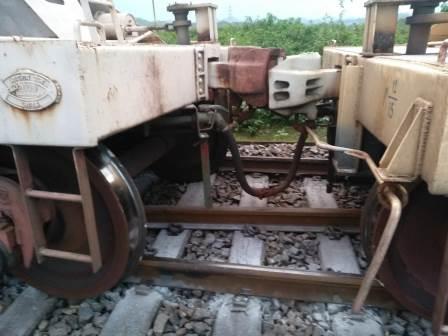 Bhubaneswar: At least 15 wagons of a goods train carrying alumina power from Nalco derailed at Damanjodi station in Odisha’s Koraput on Sunday.

15 wagons of loaded alumina powder belonging to Nalco have derailed at Damanjodi station. The loaded wagons were being drawn out of the Nalco railway siding, said an official of East Coast Railway (ECoR).

However, there was no case of injury and loss of life reported due to the incident.

It is learnt that one line at Damanjodi will be made free from obstruction before midnight.

The following trains were affected due to the derailment of the goods train:

18107 Koraput-Rourkela Express has been withdrawn. On review of the position at the site, it has been decided to run the train from Koraput at 0005 hrs, that is, just after midnight.

18448 Hirakhand Express at Koraput. This train has been diverted and will run on Koraput-Araku-Koottavalsa-Vizianagaram.