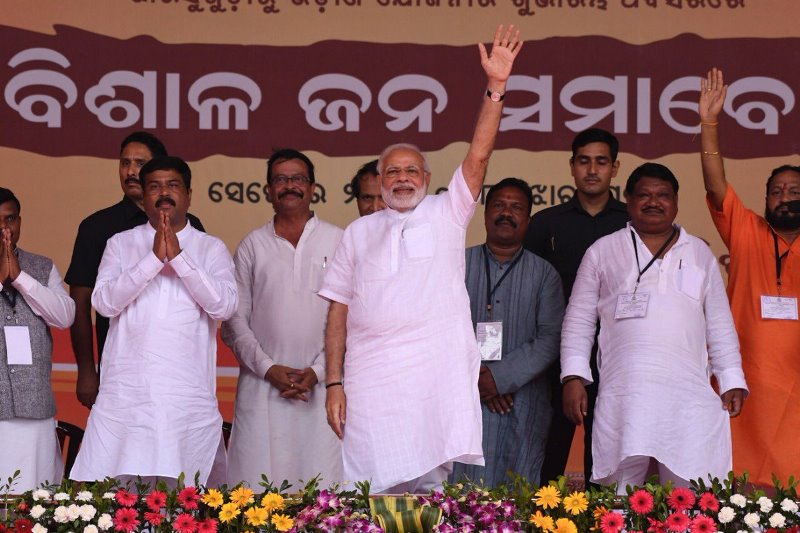 “Everyone is aware of the importance of Ayushman Bharat scheme, but Naveen Babu does not understand. Odisha government should come forward and join the programme,” Modi said.

He said Odisha needs to work towards sanitation and come at par with other states on the issue of cleanliness.

“I had urged Chief Minister Naveen Babu that Odisha will be left behind in cleanliness. But today, when I have come here, I again urge Naveen Babu to give priority to cleanliness in Odisha for the health of the people here,” he added.

With the Odisha government claiming of providing Rs 1 a kg rice to the poor people, Modi said it is only possible as the Centre gives subsidies for this rice.

“We give Rs 450 crore to the Naveen Patnaik government for these subsidies,” he informed.

He also alleged that a “PC” (percentage commission) culture has become the state government’s identity.

Modi alleged that corruption and delaying decisions have become the identity of the Odisha government resulting in the state’s tardy development.

Reacting to the allegations, Chief Minister Naveen Patnaik said, “the Biju Swasthya Kalyan Yojana (BSKY) covers extra 50 lakh beneficiaries which the Centre’s scheme does not provide. Under the scheme, we provide health assistance to the tune of Rs 7 lakh for women. As far as food security scheme is concerned, we provide the benefits to 25 lakhs extra poor people.”

On the PM’s remarks on PC culture, Patnaik said, “He must have said that to enthuse his political workers. In fact, they should be thinking of their own skill mission and Ujjwala scams. They should also think very seriously about the record rocketing prices of petrol and diesel for which all the people of the country are suffering.”

He requested the Prime Minister to consider the allocation of at least 50 per cent of the urea produced by the plant at Talcher to Odisha to meet the requirement.