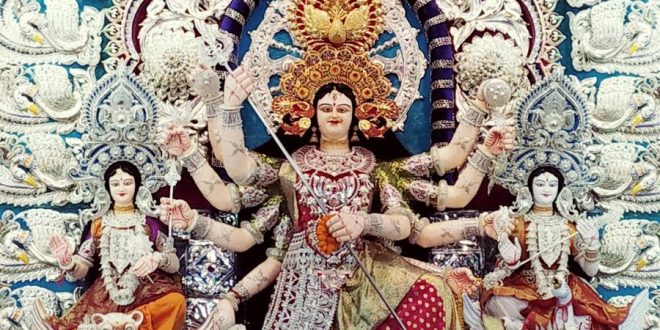 Bhubaneswar: As the city decorates itself with a new colour to welcome Goddess Durga, the Bhubaneswar Municipal Corporation (BMC) has taken up several measures including the development of four immersion ponds so that the festival will be safe and with minimal pollution.

The sanitation agencies and sanitation workers of BMC have been asked to carry out extra cleaning work near Puja pandals to make them clean. Puja organisers were advised to use extra dustbins.

The civic body has asked the Puja organisers to have restricted use of synthetic substance, colour and more use of organic things by so that there would be minimal pollution during immersion.

Organisers were also asked to limit sound near Puja pandals to around 60 decibels to minimise noise pollution.

“In order to make the people more aware during the festival season hoardings are being designed with themes like public littering, restricted use of plastic/polythene, Swachha Bharat Abhijan near Puja pandals,” said City Health Officer Dr Ramachadra Rout.

Awareness programme by public announcement and tableau (ratha) on public littering, no use of plastic/polythene, Swachha Bharat Abhijan, would continue for another one week from tomorrow so that with the public address system volunteers can make people aware across the city.

BMC has already started a trial run of a radio jingle and it will be on air from tomorrow at least for a week to continue the awareness drive.

Sources said Puja organisers were also asked by BMC to use special chemicals to minimise fire incidents, in case of any mishap.

City Engineer Debasundar Mohapatra said, “Four immersion ponds at three sites Kuakhai river near Pandara (two) and other two along Daya river near Tankapani Road bridge and near Lingipur are under preparation.”