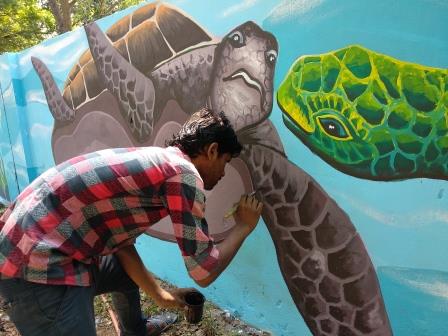 Bhubaneswar: The whitewashed walls along some of the major stretches across the city are all set for a colourful look once again in Bhubaneswar.

This year, however, the theme would be predominantly based on the World Cup Hockey. The work near AG Square with the beautiful Olly, the mascot of the game, has already started attracting public gaze.

It can be noted here that Olly has become the mascot of sports in the State and the sea turtle Olive Ridley for its mass nesting along the Odisha coast is famous around the world for its annual journey to the coast of Odisha to Gahirmatha and Rushikulya.

With the success of the beautification project undertaken during the Asian Athletic Championship last year, the Bhubaneswar Municipal Corporation (BMC) has awarded work to beautify walls with attractive murals across the city again this year to 10 agencies, for the coming Odisha Men’s Hockey World Cup-2018. The work is taken up under Street Art and Murals Project (STAMP). 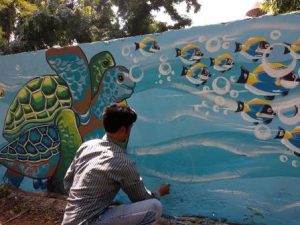 The civic body has already identified a 40-km road network for work related to wall paintings, murals and street art. This was decided after a survey by BMC for carrying out the subject work to ascertain the feasible point where the work can be carried out. BMC has decided to adopt a two-stage process for award of work.

The themes of the various artists would, however, vary with the central theme revolving around hockey and Odisha’s contribution to the game.