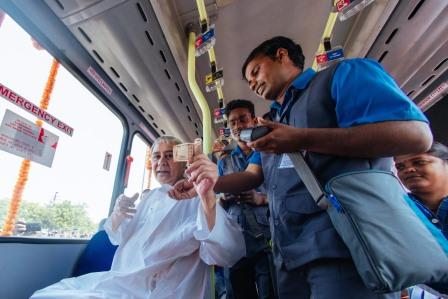 Bhubaneswar: In order to ensure a complete transformation of the urban public transport scenario in the city and its hinterland through use of smart technology, Capital Region Urban Transport (CRUT) on Tuesday rolled out its new buses under the title “Mo Bus”.

Flagging off the service for the citizens of Bhubaneswar, which has made its mark with the best Smart City proposal in the recent years, Chief Minister Naveen Patnaik congratulated the citizens for availing such a safe, economical and smart alternative of public transport.

He took the ride of the first Mo Bus along with some winners of the social media contest by CRUT and also citizens from all age groups and all social strata and economic groups. He purchased the ticket from the conductor and then took the ride.

The Mo Bus with a fleet of 125 new buses will come with many safety features like in-vehicle CCTV cameras for safety of passengers by keeping an eye on the conduct of the staff, adequate seats for women and senior citizens and deployment of women conductors.  Very soon, 75 more buses will be added to the fleet. The crew would be likely to have 50 per cent of women conductors. Students, young people can avail free Wi-Fi on the go while travelling through Mo Bus.

Vehicles under “Mo Bus’’ are intelligently designed with urban features as they would be featured with spacious cabin space. Designed as per the Urban Bus Design Code, the buses will be comfortable for use of urban public and far better than the private-owned public transport buses.

As the most cost-effective mode of transport, Mo Bus will help citizens to save a lot of money at a time when the entire country is now worried over the rising fuel prices. There would be monthly, quarterly and annual payment options to use those savings for more meaningful investments.  Citizens also can use their Odyssey City Card for purchasing their tickets while availing facilities in Mo Bus.

It will ensure minute-to-minute perfection in reaching destinations so that the travellers can save a lot of time and enhance their productivity ay workplace. The mobile app “Mo Bus” for both Android and iOS operating systems and a desktop variant can track the locations of nearby bus queue shelters, checking arrival times of buses.

The bus service will ensure almost zero waiting time as the citizens using the mobile App can also locate the bus and their exact time of arrival near a Bus Queue Shelter (BQS), where buses will be halting to take the passengers towards their destinations. BQS will also have advanced features like digital screens to display the bus route numbers and the arrival times so that the waiting passengers would benefit.

CRUT has plans to induct new buses under its ambitious Bhubaneswar City Bus Modernization Plan (BCBMP). After a detailed demand analysis by a leading transport consulting firm, it has decided to revamp the existing public transport facility in three phases spanning over 2018 to 2027.

Along with it, 200 new Bus Queue Shelters are also being developed to provide passenger convenience. 100 bus queue shelter shall have cycle stands facilities to provide last mile connectivity to the commuters. During the second phase of BCBMP, it will have 300 additional BQS shall be developed during this phase.

In the third phase, 300 new buses shall be procured in newly developed or uncovered areas of Bhubaneswar, Puri and Cuttack. With the revised facilities the first phase of BCBMP project shall create 2,200 direct employment opportunities which will serve approximately 1.2 lakh passengers on daily basis.

Along with improving the transit infrastructure, the overall modernization of bus services would completely depend upon the use of Intelligent Public Transport System and for that city is currently building an IT backbone to support Bhubaneswar Operation Centre (BOC). BOC shall have a special cell to manage city bus services operated by CRUT.

All the buses shall be fitted with Automatic Vehicle Locator System (AVLS) for tracking and vehicle information shall be shared with commuters for their convenience.

Fare shall be collected through electronic ticket machines (ETMs) only and Automatic Fare Collection System shall also be available to daily passengers in the form of Odyssey City Card. The transit app of CRUT will also cover services like PBS and E-Rickshaws. There is also a plan to integrate the fare of all the services in near future to provide a seamless journey experience to the commuters.

Twenty winners from two contests, held on Social Media platforms of CRUT, also joined the celebrities and the VIPs and got the chance of the first ride on the Mo Bus after the inauguration by the Chief Minister.

The two contests were held on “Decoding the CRUT tagline” and “Features of the bus”. One winner Rudra Prasanna Rath came with his seven-year-old daughter. The little one was excited to have a ride with the celebrities.