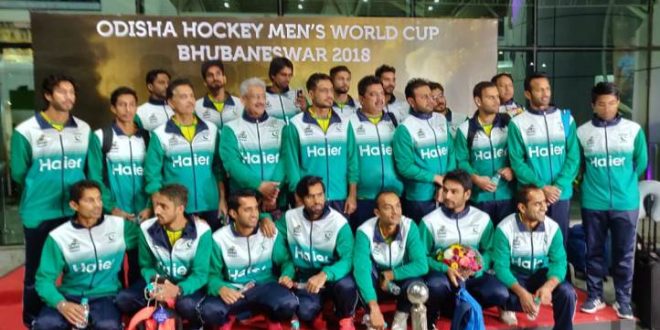 Kalinga Stadium is lucky ground for us: Pakistan

Bhubaneswar: Pakistan Hockey Team, which arrived in Odisha for Hockey Men’s World Cup Bhubaneswar 2018, said Kalinga Stadium is the lucky ground for them.

“We have come here before and we have always enjoyed playing at this venue. It is a lucky ground for us and we are very excited to be back,” expressed Rizwan Senior on the team’s arrival at the Biju Patnaik International Airport.

The team led by Muhammad Rizwan Senior shared their anticipation and excitement to arrive in Bhubaneswar where they last played the FIH Champions Trophy Final against Australia in 2014.

Speaking of the ‘Pool of Death’ Pool D, Hasan Sardar the legendary centre-forward and team manager of Pakistan team said, “With Germany, the Netherlands, Malaysia in our pool, it is a pool of death and every single match will matter. We will need to play it like it is a knockout in every single game. The first match is against Germany and we are targeting a win against them. I would like to wish all participating teams the very best. I hope all 16 teams put up a great show so people of India and everyone in the world enjoy hockey matches.”

Earlier in the evening, the Netherlands and Belgium arrived for the tournament to begin on 28 November 2018.

“Bhubaneswar is a great place to be and play hockey in front of an amazing crowd. We are in a tough group with strong teams. We play Malaysia first and we need to make sure we keep our heads down and play our best every match,” asserted Max Caldas, Head Coach of the Netherlands.

Speaking of the team’s excitement to be back in Bhubaneswar, experienced player Billy Baker said, “We have won almost every match we have played this season and we have also had really tough preparations for the tournament. We are aware of the Bhubaneswar crowds who come in large numbers and we want to enjoy playing in front of them and also use their support to feel motivated.” The Netherlands begin their campaign on 1 December 2018.

World No.3 Belgium too arrived few minutes after their nemesis the Netherlands and shared their anticipation to play at the iconic Kalinga Stadium again.

“We are arriving after three months of solid preparations. We pretty much trained full time and the preparations were heavy. The guys are really fit and sharp. We are excited to get going,” said Belgium Skipper Thomas Briels.