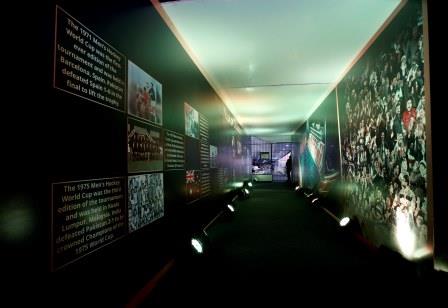 Bhubaneswar: With just two days to go, Kalinga Stadium, the venue for the Odisha Hockey Men’s World Cup 2018 is at its dazzling best and is ready to enthral the spectators and teams alike.

The spruced-up venue has both practice and main turfs re-laid with new blue turf as per the FIH specifications.

The capacity of the main stadium has been increased to 15,000. Two new galleries, one on North and other on the Southside, have been added to the iconic venue, making it a total of four grand Stands.

Besides, four Player’s Changing Rooms, designed and implemented by Competitions Department of Hockey India after thorough research done across player’s changing rooms utilised for various High-Performance International/ club sports and set up for the first time ever across any hockey stadium in the world, three dedicated Goalkeeper Equipment Rooms have also been designed keeping in mind the elaborate kitting that a Goalkeeper has and dedicated Umpire’s Changing Room.

There is also an exclusive Lounge for the Players and Officials, while a dedicated Media Centre, special boxes for VIPs and Officials have also been created at the venue.

Also, a Walk of Champions has been created, showcasing the World Cup winners starting from 1971 to 2014 dedicated to Men’s Hockey World Champions and the athlete’s participating in the Odisha Hockey Men’s World Cup Bhubaneswar 2018.

“Our aim is to make this World Cup a benchmark for years to come. To reach that level, our endeavour is to offer top-of-the-line facilities for players, spectators, fans and all stakeholders alike. Keeping that in mind, the stadium has been revamped in a manner befitting to host an event of this magnitude,” Elena Norman, CEO, Hockey India.

“This is by far the biggest and grandest sporting event being hosted in the State of Odisha and Bhubaneswar. Our aim was to give every single person who comes to the stadium, be it a fan, a player or a stakeholder, a memorable experience and the stadium now looks equipped to achieve that,” said Vishal Kumar Dev, Odisha Sports secretary.